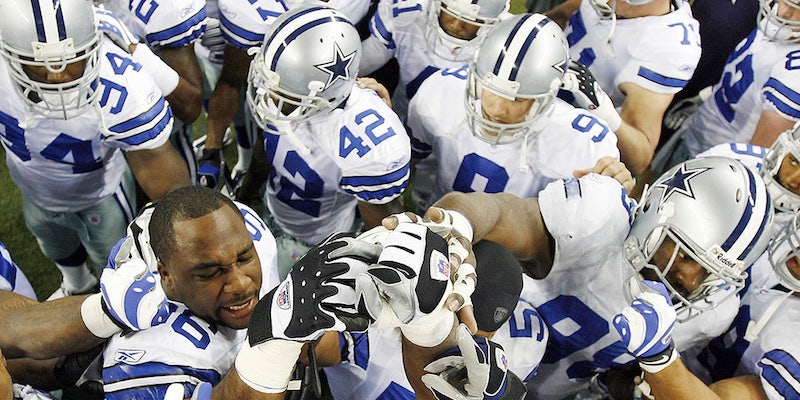 When the Dallas Cowboys beat the Detroit Lions last week, roughly one in four American televisions dialed in. The epic theater of the game itself helped balloon ratings, as did the fact that the NFL is an indestructible Death Star of influence.

But mostly, it was the Dallas Cowboys—a tarnished brand that’s been responsible for poor-to-heartbreaking football for 20 years—reigniting postseason passions all over the world.

Sunday in Green Bay, Wis., the Cowboys are set to relive the 1967 Ice Bowl in frigid Lambeau Field. You can expect bigger ratings because the football stakes are higher and the opponent this time is a team just as popular domestically, with prouder history.

In other words, you can expect this thing to be a congested buffet of tweets and status updates. Not a bad time to accept that football is one of the last equalizers and unifying escapes in American culture—a game adored by big data, secular humanists, men and women of color, and a homeless man I once shared a beer with on the streets of Baltimore just before the Ravens won the Super Bowl.

Beer commercial culture, cancerous institutional responses to domestic violence, the fact that the game should maybe not exist because playing it kills people—all are terminal problems. But the Dallas Cowboys are the most unifying, diverse banner in American sports and you might as well adore them. Here’s why.

A great deal is made of New Jersey Governor Chris Christie‘s absurd fanaticism for the Boys. The Beltway can groan about its political motivations, but on the contrary it will have to hurt him because Christie’s been too earnest and eager—more than happy to present himself as a goofy sidekick to team owner Jerry Jones, as a docile lucky rabbit’s foot that travels with the franchise. He has to know that it’s not a good look for the potential leader of the free world to present himself with the commanding grace of the “Da Bears” guys.

In addition to the eventual Republican presidential primary loser, the Cowboys have undoubtedly the coolest army of celeb supporters around. Here is an exhaustive gallery. Some highlights:

When someone say “Man your Cowboys stink!!” I say “Yeah I know we do sitting at 5-1. Hahaha” #WeDemBoyz #StriveForGreatness

Don’t get it confused tho…Cowboy fan for LIFE!

How about them mother f##### Cowboys. Yes https://t.co/Sz5ujbyTwJ

3) Jerry Jones is the man

The most loathed, conservative lizard man owner in sports to be exact. He’s a snakecharmer who loves to throw money at Republican principles. But he’s also an ever-blooming houseplant—a swindling, plastic surgery-havin’, skirt chasin’ good ol’ boy who loves relocating entire neighborhoods in order to build a gross stadium. Like film director James Cameron and other stubborn, megalomaniac contemporaries, he’s not into delegating and often ruins the creative process with too much hands-on involvement. But he did once say this.

That’s Mexican immigrants Ramiro and Felicita, who are just the best.

“Everyone thought I was Italian.”

5) How hard Mexicans ride for the Cowboys

This is a sweeping generalization, but Mexicans and Mexican-Americans goddamn love the Cowboys, and that’s pretty cool. From the Rio Grande Valley to El Paso to the panhandle to Beaumont, this is a state run by a harsh affection for this team. My personal experience is that adopting the Cowboys is a fast track to playground assimilation—a happy medium for newer generations still hesitant to root for the U.S. over Mexico during soccer. But in Mexico proper, the NFL is must-see TV and the Cowboys are undoubtedly the dominant brand.

The Cowboys used to sellout Mexico City’s 100,000-plus Estadio Azteca for meaningless exhibition games in the ’90s. In 2005, a game in Mexico City between the Cardinals and 49ers became the NFL’s most-attended game ever. The league is perpetually into bringing pro football to London—funny because Mexico City is a two-hour flight from Texas and those people actually watch and play the game.

6) How hard African-Americans ride for the Cowboys

Beyond regional sports loyalties, it’s wildly common to see African-Americans supporting the Cowboys. Look no further than the home of Dallas’s arch nemesis, the Washington football team. Dallas was one of the first NFL teams to integrate, and Washington was the last. As the Washington City Paper notes:

Redskins owner George Preston Marshal steadfastly refused to integrate the team until 1961, nine years after every other team in the league. His segregationist delay coincided with a boom in D.C.’s black population, which by 1960 represented 54 percent of the city.

Meanwhile, in 1960, the Cowboys were pressuring the Dallas Hotel Association to desegregate so that, if nothing else, the team could stay together.

More than historical precedent, the prime-time Cowboys of the ’90s were propelled by vocal and proud locker room leaders like Michael Irvin and Charles Haley. An expressive collection of black men not afraid to bring style to the league, one not interested in performing like a well-trained collection of reserved soldiers.

7) Speaking of Irvin, you gotta see this speech

Not the moving Hall of Fame induction speech or his outspoken support of gay rights—the pregame jumbotron special from last week.

8) Back to race stuff one last time

There’s no real profile of a Cowboys fan—America’s Team and all. This is my favorite part about rooting for them. Aside from Manchester United, there isn’t a sports team on Earth with a more diverse and global collection of fans. In Texas, specifically, a trip to AT&T Stadium means fans with Asian, South Asian, African, and European heritage all there to spend $16 on a poor slushy margarita. It’s a palpable, beautiful thing.

It’s not that good but it does make you want to play it while watching Dez Bryant highlights.

The Dallas-area collective sells itself with a tailgate dance party in the parking lot and it’s adorable.

11) The tension of being gerrymandered into a regional division with… Philadelphia, New York, and D.C.

The NFC East is extra stressful—and thus rewarding when conquered—because the Cowboys play against three massive, hateful markets six times a year. The nationwide hate stems from these hubs of agenda-setting national news. But come on, these people don’t even follow college football.

Cowboys star running back DeMarco Murray allegedly had an affair with the wife of former University of Oklahoma teammate Brennan Clay. She saved his number as “spray tan” and the pair reportedly exchanged dubious text messages. It’s a shame, but does make a great nickname for Murray going forward.

As head man in charge of the 2008 Lions, current Cowboys defensive coordinator Rod Marinelli led a historically bad, 0-16 campaign. Now the gruff Vietnam veteran is barking at the Cowboys on defense and it has a collection of unheralded and thrown-away players doing moderately OK. I’ve really enjoyed the lightning ascent from 32nd to, like, 21st.

Just about the most fun three words to use these days—kudos for the team for making it a point to pipe this one in during games.

15) This spin move against the NFL’s most dominant defender