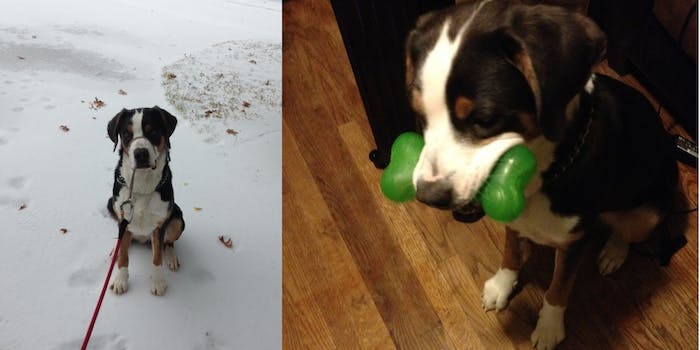 The dog's new owner claims she was being underfed and left outside in freezing weather.

Redditor cgdarden probably meant well when he posted his lost dog’s picture to Reddit. Heidi, a young Swiss Mountain dog, went missing in the Fort Worth area, allegedly sometime on Friday. After the weekend, he posted a $1,000 reward for Heidi to Craigslist. When that didn’t help, he uploaded pictures of his dog to Imgur and submitted them to r/FortWorth, upping the reward to $2,000.

Sounds like someone who really loves his pet, right?

Not according to the redditor who claims they took her right out of his front yard—to save her life from his negligence.

Redditor dogthedogsaver left a long, scathing comment in response to cgdarden’s post in which they claimed to have taken Heidi out of the yard because she was freezing and showing signs of neglect.

Fort Worth was in the middle of a surprise ice storm on Friday, when the redditor claimed they passed by cgdarden’s house and observed Heidi sitting outside in the cold:

I was walking to McDonalds on Friday afternoon and cut through your car port to avoid the ice and that’s when I [saw] your dog sitting alone in her dog run looking really miserable. It might have been because it was 20 degrees out or maybe it was because she had no food, water or blanket. Who knows…. Several hours later I was walking to CVS and noticed that she was still there. I petted her some and couldn’t believe how incredibly cold to the touch she was. As if she’d been outside for hours. I knocked on the door to see if anyone was home but no one answered.

Dogthedogsaver claimed that they took Heidi home after calling animal shelters and knocking on cgdarden’s door, all to no avail. The redditor stated they intended to return Heidi the next day before realizing she showed signs of malnourishment. She had no identification tags, was trapped in a narrow “dog run” the size of a hallway, hadn’t been spayed, attempted to eat out of a litterbox, and was covered in fleas:

Maybe I should add that she doesn’t even recognize her own name, doesn’t know how to play with toys, is covered in a film of filth and has a crap ton of fleas. How the hell do you get fleas in winter!

So yea, I’m confused as to why you’re offering so much for a dog that you seemed to care so little for.

The redditor then  ncluded a photo of a new and improved Heidi, with a glossier coat and a dog toy.

Heidi is so much happier now. She whines at the door when her new daddy leaves, has a huge back yard to play in and two other dogs her size to play around with. Oh, and she has a doggie door so she can go in and out whenever she wants.

Reddit promptly showered dogthedogsaver with Reddit gold eight times over, and voted their thread to Reddit’s /bestof forum, where it quickly sailed to the top.

But plenty of redditors pointed out holes in the “rescuer’s” story, noting that they originally mixed up the day they said they found the dog on, and produced no photographic proof of neglect. “I bet OP is the dog rescuer,” commented miked923:

What if this is all just a massive conspiracy to get lots of karma? The picture was probably taken from the warmth of the house where the dog has stayed all day.

Either way, we hope Heidi is somewhere warm and safe.

Update: The original poster claimed in an email to the Daily Dot that he is not Heidi’s owner, and just posted the notice on Reddit after seeing missing dog signs around town.