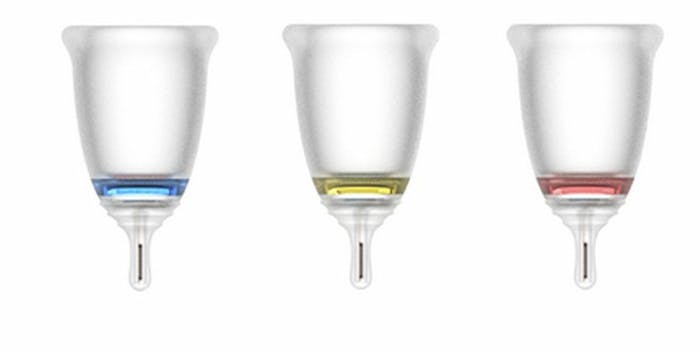 Your vagina can now text you. Really.

There’s nothing like the thrill of an incoming text message, particularly when that text is from your vagina.

For the uninitiated, a menstrual cup is a bell-shaped, silicone receptacle worn inside the vagina to collect period blood during that time of the month. Some women prefer to use a menstrual cup as an eco-friendly alternative to disposable pads and tampons. Menstrual cup wearers must empty their receptacle periodically, but the question is, how do you know when it’s full?

Enter the Looncup: It’s connected to an app on your smartphone, which will tell you in real-time how full your cup is, when it’s time to empty it, and the volume at which you’re flowing. The fuller your menstrual cup, the more alerts you’ll get. It also claims to help detect gynecological problems by monitoring the color the period blood, which could indicate potential issues.

The name Looncup is a play on the Mooncup, which was one of the original mainstream menstrual cups on the market, as well as Luna, the Greek goddess of the moon, according to Kate. Looncup was dreamed up by a team of entrepreneurs, PhDs in biomedical engineering, product design makers, app makers and marketers who “want women to free themselves and get the information they need to lead healthier, more active lives,” according to the project description.

While they don’t have a U.S. patent yet for their first-of-its-kind product (though they have a patent in Korea), they do have a Kickstarter, which has exceeded its goal of $50,000 with 21 days left to fundraise. The Kickstarter timeline indicates that Looncup plans to go to production in November and will begin shipping to backers in January 2016.

Does your cup runneth over with excitement?

Update 11:21am, Feb. 2, 2017: The Looncup might have been too good to be true. According to some reports, there are now hundreds of comments from dissatisfied backers on the Kickstarter campaign page who claim they never received their product and/or have been ignored by the creators. Another backer on Reddit claimed the product’s feature list was changed dramatically.