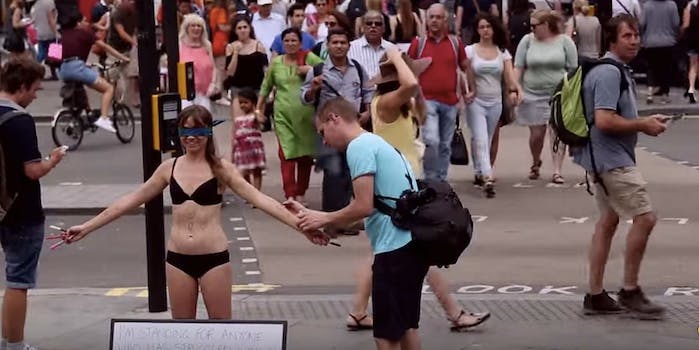 Jae West bared her soul and her body.

Standing in the middle of London’s Piccadilly Circus is overwhelming enough on its own. Now imagine doing it almost naked.

Jae West is a member of a group called The Liberators. The group’s founder, Peter Hendrick Sharp, wants, to “awaken and unify humanity with acts of love and kindness.” To help achieve this goal, West stood in Piccadilly Circus in just her bra and underwear to make a powerful statement about body image.

A sign next to her read “I’m standing for anyone who has struggled with an eating disorder or self-esteem issue like me…to support self-acceptance, draw a heart on my body.”

In a post on Inspiralight, Sharp’s blog, West explained what it was like to bare her soul and her skin in public while holding pens in her hand and waiting for someone to draw the first heart.

“The feeling of the felt pen was on my skin was one of the most overwhelming feelings of relief, gratitude and love that I’ve ever felt,” she wrote. “I just burst into tears. I don’t know who that first person was but I am so thankful for their contribution.”

She also shared a moment that made the entire thing worth it.

One of the most moving and inspiring moments for me was listening to a Father explain to his children what I was doing. He was acknowledging the fact that everyone should love themselves exactly as they are and appreciate the bodies that they are given. It warmed my heart to know that his children and others would grow up understanding the impact of this global issue and have a feeling of contribution after drawing a love heart on my body. If everyone could know and appreciate how beautiful they are from childhood I think this world would be a very different place.

“With the growing prevalence of eating-disorders and self-esteem issues around the world,” she concluded, “this public act of self-acceptance aims to get people to question the true relationship that they have to themselves and body-image.”