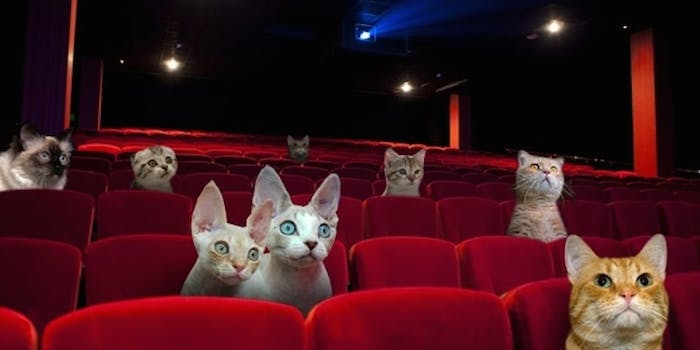 A cat cinema is coming to London

Humans are welcome too.

Movies—they’re not just for humans anymore.

Two mad crowdfunding geniuses in London aim to raise $84,000 on Indiegogo to open a combination movie theater-cat cafe. This is the brainchild of British couple Will Piper and Paula Siedlacka, and it will be called Great Kitten.

The aim is to show 10 movies per week across genres for maximum appeal in a cat-friendly space. Adjoining the theater will be a cat café akin to those that have recently caught on in the United States after being popular elsewhere around the world. Because the cats are the stars of this show, all their needs are accounted for. They will have a no-humans-allowed territory to retreat to when they need to recharge their batteries, as well as plenty of tall places to jump to for exercise.

Adding another appealing wrinkle to Great Kitten’s plans: There’s a charity element at work here. One afternoon a week, they will open their doors to people with mental health issues, learning disabilities, and severe illness so that they might know the therapeutic love of a feline. Therapy cats are totally a real thing, so Great Kitten will tailor its selection of kitty residents to be the friendliest possible.

The crowdfunding rewards vary depending on how much you care to contribute to the cause. They range from small items like coffee mugs and T-shirts to naming rights for a cat.

You can learn more on Great Kitten’s Indiegogo page.