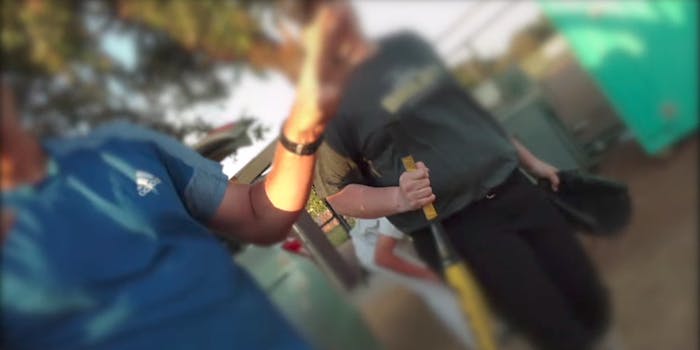 In this confrontation, no one wins.

Most viral video clips involving family moments are funny or heartwarming, but this video of a Little League coach and his two kids getting into a threatening shouting match is enough to make your stomach turn.

In this four-minute YouTube video, the poster, whose username is Fair West, confronts the coach and his two kids at a Northern California baseball field after returning to his car and seeing a large radial crack in his windshield. According to the video description, he was told by witnesses that a ball had popped over the fence and hit the car.

The poster writes that the family was the only group playing baseball on the fields, as practice is typically limited to teams only. When he confronted the father about how he would be compensated for the windshield crack, he was told it was his own fault for parking in the lot by the field.

That’s when the poster says he felt unsafe and started documenting the interaction for his insurance. And judging by what the dad and kids, who appear to be in their mid to late teens, proceed to shout at the person taking the video, his quick thinking will probably help him in the long run.

Early in the video, after giving the poster $55 instead of his requested $200, the dad tells him he’s the “wrong dude to fuck with,” followed by his teen daughter yelling at the man with a baseball bat in her hand. The dad then proceeds to tell him, “We would own you.” The son also becomes upset, yelling at the man to either take the money his dad is offering, or leave. The dad later says he would “bury” the man, all this between more shouting from the daughter and son. (He blurred the video, since the children were minors.)

Obviously, this poster isn’t perfect either—he starts out the video’s description by writing, “Do your thing internet,” very much so hoping that mob mentality takes hold of the viewers and somehow avenges him with threats or even possibly disciplinary action from the Little League. While he also posts a photo of the large crack in his windshield, he shares a clear image of the dad too, and even includes the name of the ballpark.

All in a day’s work of people being angry on the internet.