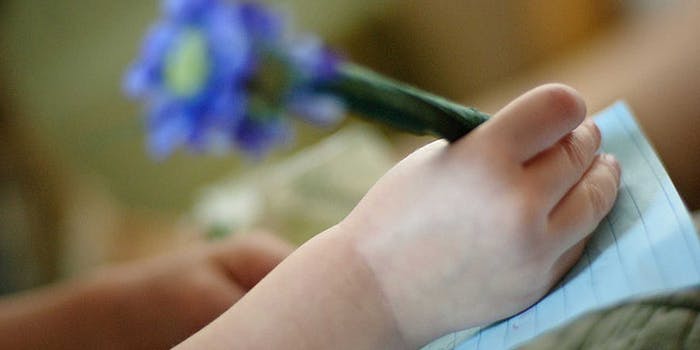 Some love letters are criminally bad, but one little boy’s sweet nothings could potentially lead to criminal action.

The nine-year-old Tampa, Florida child has a crush on his female classmate and penned a number of love notes that he passed to her. He wrote about “How she wears the same uniform” and “how her eyes sparkled like diamonds,” his mother told WFTS Tampa.

But then kids began acting like kids and removed any shred of young romance. Classmates teased the boy about wanting to see the girl naked and when administrators caught wind of the hubbub, they threatened him with sexual harassment charges. This is why we can’t have nice things.

According to the school principal, the notes were unwanted by the girl, and he gave the boy an ultimatum: If he writes one more note, he’ll be charged with harassment.

While it’s never too early to teach children about boundaries and respecting space, it’s hard to believe that a fourth grader had any ill-intentions in his note passing. A stern talking to about “no means no” probably would have sufficed.

The boy’s mother put it best: “My 9-year-old doesn’t even know what sexual harassment means.”