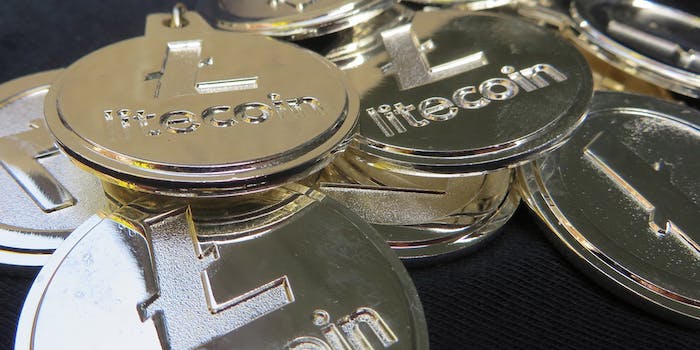 In the U.K., you can pay a high-end escort in Litecoins

These escorts take Bitcoin, too.

These days, you can pretty much buy anything with bitcoins, be it a pint of milk from a Brooklyn bodega or a shot of JD from a bar in Beijing. Add one more product to the list of items available for digital purchase: illicit sex with a high-end British escort.

Manchester, U.K.-based escort agency Northern Jewels recently announced that it will start accepting Litecoin, a peer-to-peer cryptocurrency similar to Bitcoin. Although it’s not the first escort agency to embrace the digital currency—Passion VIP, an escort agency in Birmingham, U.K., announced it would start accepting Bitcoin last September—Northern Jewels is the first in the world to accept Litecoin, a less popular, but arguably more efficient, Bitcoin competitor.

In a Nov. 4 press release, a representative for Northern Jewels explained the agency’s decision to start accepting Litecoins: “Our client’s [sic] desire privacy, Crypto currencies offer this. Like Bitcoins there are a lot of people out there with nothing to spend their Litecoins on. Also like Bitcoins, Litecoins are easily purchased in a relatively anonymous way.”

The press release also cited the security of a Litecoin transaction, from both the client’s and the escort’s end. Like with Bitcoin, Litecoin transactions can be processed almost immediately, which allows the agency to confirm payment and set up an appointment within a few minutes.

Although litecoins are currently worth less than bitcoins (a Litecoin is worth about $4.65 USD, compared to Bitcoin’s new high of $373), they have some advantages over their cryptocurrency competitors. Litecoins can handle higher transaction volume and can be efficiently mined with consumer-grade software. Passion VIP has apparently figured this out already: Their NSFW site now says they accept both litecoins and bitcoins.

So will cryptocurrencies like Litecoin revolutionize the sex biz? Considering how murky the future of the peer-to-peer cryptocurrency is, it’s difficult to say. But with no embarrassing credit card charges or messy paper trails to worry about, it’s likely that more hobbyists and providers, (as clients and escorts are euphemistically referred to) will continue to jump on the Btcoin train.