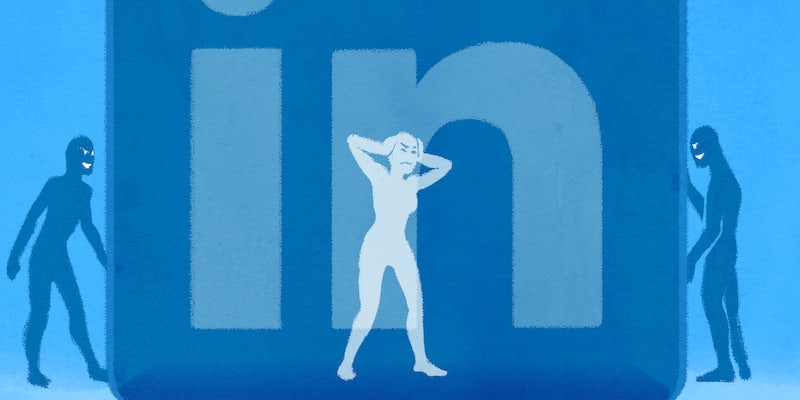 Women join the site for professional networking, not comments about their physical appearance.

That is, except for the men who use site to make unwanted sexual advances towards women.

This week, UK lawyer Charlotte Proudman made headlines after tweeting an unwelcome message she received from a contact. “I appreciate that this is probably horrendously politically incorrect but that is a stunning picture!!!” Wrote Alexander Carter-Silk, after receiving Proudman’s invitation to connect. “You definitely win the prize for the best Linked in [sic] picture I have ever seen,” he continued.

Proudman, who is 30 years Carter-Silk’s junior, wrote a strongly-worded response, calling him out on his “unacceptable and misogynistic behaviour.” She then posted a screenshot of the full exchange on Twitter, asking “How many women @LinkedIn are contacted re physical appearance rather than prof skills?”

How many women @LinkedIn are contacted re physical appearance rather than prof skills? @Jessica_Asato @ObjectUpdate pic.twitter.com/YglDA1JdEX

Proudman’s tweets incurred some backlash in the media, where she was seen as carping on about nonsense rather than exposing a microaggression. “It’s not as if he sidled up to her in a bar and pinched her bum,” wrote reporter Sarah Vine in a Daily Mail piece, “If A Man Can’t Compliment A Woman, The Human Race Is In Deep Trouble.” Proudman’s face also appeared on the front page of the Daily Mail on Thursday next to a headline about “Feminazis”:

Still, Proudman defended her decision to publicize the incident in a statement to the Guardian:

“I think it’s important that we collectively call out this sexism and I think that is what this tweet has done. My LinkedIn profile is professional, there is no discussion of my personal life. It is a headshot photograph and yet people seem to think that this is an invitation to make advances or discuss your physical appearance, which is unacceptable.”

Though Proudman’s exchange with Carter-Silk went unprecedentedly viral, sexual harassment is apparently not a new problem for LinkedIn. When Proudman took to Twitter, women responded in droves with their own stories:

@CRProudman thx for speaking up. I received this a few years back, and the worse is he was offended by my reply!!?! pic.twitter.com/5ah82miRc3

@CRProudman I’ve been on the receiving end whilst pregnant. Back then I thought it would have been career suicide to challenge

#charlotteproudman is getting bashed for her reaction on #sexist @LinkedIn message, can I chip in with my reaction? pic.twitter.com/PnvCieIJWY

“After seeing how Charlotte got bashed in social media, I would love her and everyone else to know she’s not alone,” Jacqueline Freundorfer, a communications manager based in Germany, told the Daily Dot. A year ago, Freundorfer received a message from a male contact, complimenting her on her “amazing profile and attractive picture.” Like Proudman, Freundorfer responded, telling the man, “I am not in any circumstances interested in what a complete stranger on a professional networking site has to say about my outer appearance.” She quite patiently explained that she chose her photo because she thought it conveyed determination and advised the man to go look for his next date on Tinder instead.

“I very well remember this incident,” Freundorfer told the Daily Dot. “It [was not] the first time something like this happened…I decided I won’t keep my mouth shut any longer. After all, how will one ever learn that their behavior is wrong, if you don’t tell them?”

As in the physical workspace, sexual harassment in social networking includes everything from inappropriate remarks about a woman’s appearance to overt sexual advances. “Professionalism” while networking, it seems, is a fluid concept for some men. Eileen Guo, founder of Impassion Afghanistan, uses LinkedIn regularly, and while many of her exchanges with new connections have been business-appropriate, she has also received messages that she describes as “overly familiar,” resulting in meetings that she assumed were professional in nature but the men assumed were dates. (And it’s often not solely a matter of sexism; in an email to the Daily Dot, Guo recounted a time in which a man wrote to her in Chinese “even though there is nothing on my profile that suggests that I am Chinese, other than my Asian-ness.” She added, “That actually offended me more than some of the purely sexist comments.)

In an article for SheSaid.com, Australian journalist Nicole Carrington-Sima expressed her shock and discomfort upon receiving a message from a new professional contact, calling her “a very beautiful looking woman with a sweet charming face, what a wonderful warming smile on it.” Far from feeling complimented, she is angered that someone would say that to her within the context of professional networking.

“To think that some predatory men are using LinkedIn as a pick-up tool makes my blood boil,” Carrington-Sima told the Daily Dot. “It’s insulting, degrading and deeply offensive to be praised for your physical appearance—and asked out on dates—on a job network!”

Marketing consultant Melinda Byerley tried a different approach to raising awareness about this issue—she started the Tumblr Sexism on LinkedIn. While she no longer maintains it due to safety concerns, she started the blog to post screenshots of sexist and inappropriate public content found on LinkedIn. Though Byerley has not received any uncomfortable direct messages on the site, she has still felt undercurrents of sexism among users. “After I lost weight and did a bit of a makeover and posted my new picture, the number of invites I got from men I didn’t know tripled,” she said.

And much like Proudman, when women do speak out about the sexism they encounter on LinkedIn, they face negative backlash. “I’ve been cautioned by men in my field not to position myself as too ‘angry’ lest I be perceived as someone men don’t want to work with,” Byerley told the Daily Dot. “In fact, I’ve had situations where clients say they were intimidated by me at first because I do address these subjects so directly.”

Despite all the places online where flirtation is encouraged, from dating sites to apps, the Internet is rife with unwanted sexual advances. An inappropriate Facebook message, lewd remarks over Twitter or unwanted dick pics in your inbox are all too common experiences for many women. Is it simply an inevitability that LinkedIn—which boasts that two new members join the site every second—will be next?

Though LinkedIn does have a system for reporting inappropriate messages, the site has largely remained quiet on the issue of sexual harassment by its users—something many women wish to see change. As she wrote in her blog post, Carrington-Sima received the following response from LinkedIn when she reported the harassment she experienced:

“As the world’s largest professional networking site, our services are designed to promote economic opportunity for our members, by enabling millions of professionals to connect, exchange ideas, learn, and find opportunities or employees and work. LinkedIn profiles, as well as the use of the site is subject to our user agreement that requires members to use our services in a professional manner. We encourage members to report activities that violate this agreement. When we detect or are notified of any such violations, we take immediate steps to investigate and rectify where necessary.”

But it’s not enough, she said. “I would like to see LinkedIn take a more proactive stance in stamping out this bad behavior,” said Carrington-Sima. “It’s not okay to sexually harass women on any social media platform.” (At the time of publication, LinkedIn had not responded to a request for comment from the Daily Dot.)

For his part, Carter-Silk claimed his message to Proudman is a misunderstanding. In a statement to legal news site RollOnFriday, he said, “Most people post pretty unprofessional pictures on Linked in, my comment was aimed at the professional quality of the presentation on linked in [sic] which was unfortunately misinterpreted.”

Meanwhile, women who use LinkedIn are doing what women have always done to deal with inequality—adapt and adjust to men’s behavior:

Update 9:02am CT, Sept. 15: LinkedIn provided the following statement to the Daily Dot:

“The 19 million UK members on LinkedIn, and the 380 million around the world, are members because they want to build their careers and become better professionals. The online world has no shortage of places for people looking for dates; it’s neither common, nor effective, to do that on LinkedIn. And if someone insists on trying, we have tools in place to block those people ​– and where necessary, remove them from the site altogether.”