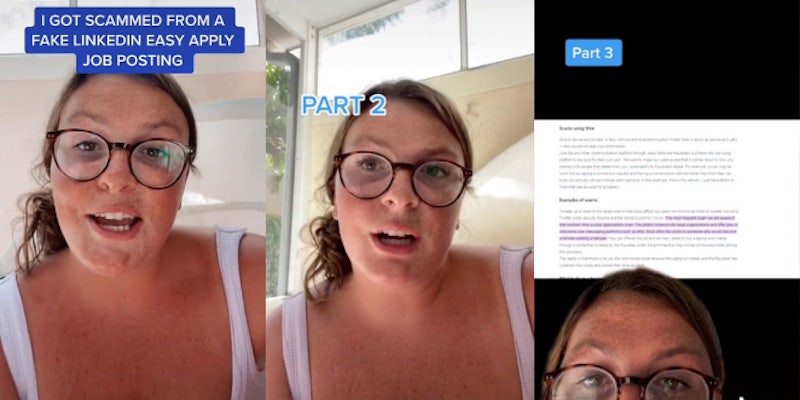 In a trio of viral videos, TikToker Callie Heim (@callieheim) shared her experience getting scammed by an easy apply LinkedIn job posting. After applying to an array of different marketing jobs, she began the interviewing process for driving technology company Waymo.

“It was humbling and really embarrassing,” she says in the clip. “I’ve been wanting to make a video about it for a while…I’ve decided I want to do that now to spread awareness and so this doesn’t happen to somebody else.”

Heim explains that the company asked her to download the messaging platform Wire. Looking back, the creator now realizes this was the first red flag. After two interviews, one through the “futuristic” messaging app and a phone call, the company said that she would be getting a phone, printer, and laptop for work, she adds.

“I’m excited,” Heim recalls. “They pretty much gave me the job after a day of talking to them further which, again, is a red flag, but at the time I didn’t realize.”

In the comments section, users shared their opinions on the situation.

“Would not even cross my mind that this was a scam so good to know,” one user said.

“Thank you for sharing! This feels/sounds so legit especially for a remote position for a tech company,” another commented.

“Why are there so many different types of scams these days?” a third user questioned.

In her first follow-up video, Heim explains how she and her boyfriend realized that the whole process may have been a scam.

“It’s not LinkedIn’s fault,” she says. “Somebody was impersonating an HR person from a company that already had a job posting on LinkedIn so they literally made their account look exactly like that one so it looked very legit.”

She says that another member of the company reached out to her and brought up the laptop again. They told the creator that she would be reimbursed by Waymo after buying the laptop herself.

“Immediately the alarm bells started going off. However, I was so excited about this job that I was like ‘hmmm, let me see it through,’” Heim explains. However, she asked her boyfriend who worked in cybersecurity because at this point, things were seeming fishy.

After some loose digging, her boyfriend found out about the well-known scam utilizing the Wire platform.

“The most frequent scam we are aware of that involves Wire is a job applications scam,” the Wire site reads. “Fraudsters impersonate large organizations and offer jobs or interviews over messaging platforms such as Wire. Most often the victim is someone who would become a remote working employee. They get offered the job and are then asked to buy a laptop and mobile through a portal that is setup by the fraudster under the promise that they will be reimbursed when joining the company. The reality is that there is no job, the interviewee never receives the laptop or mobile, and the fraudster has collected the money and closed their Wire account.”

Heim states that she had already posted about the new job on LinkedIn.

“It was definitely humbling because I had already posted on LinkedIn and was like ‘oh, this is my new job.’ All my old coworkers and everyone was like ‘oh congrats!’” she says. “Yeah. It was very embarrassing.”

In the final video of the series, Heim adds some clarity to the story.

Heim had given all of her banking information and onboarding documents to the scammers, so after realizing the issue, Heim immediately closed her bank account.

“They definitely didn’t financially scam me but they did emotionally scam me,” she claims. “The way I was so excited for that job…The best thing that could’ve happened to me is I get a job fresh out of college.”

In the comments section, Heim clarified that she did not send her social security number to the scammers.

The Daily Dot reached out to Heim via Instagram direct message.