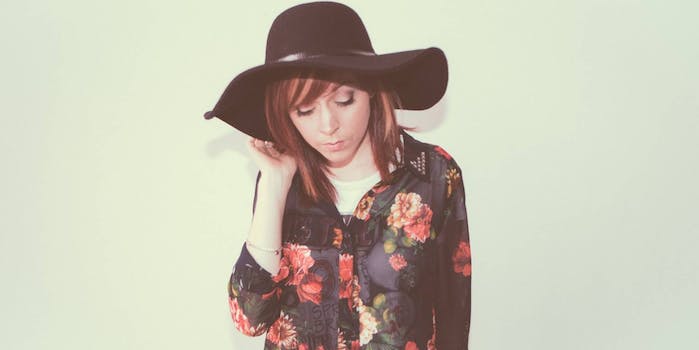 Lindsey Stirling: How I broke my cycle of depression

YouTube's favorite violinist opens up about her struggles with depression and anorexia.

The following op-ed by Lindsey Stirling, violinist and highest paid female YouTuber, is a part of Mogul’s#IAmAMogul campaign. Using the voices of top influencers such as Stirling, Mogul inspires the next generation of girls to recognize that they, too, can be strong, successful, empowered moguls.

Why are we so afraid to talk about mental health? Words like depression, anorexia, anxiety, and PTSD to name a few are linked with negative social stigmas and judgment. However, whether it is genetic or situational, I feel that most people at some point in their life will struggle with mental health. I think one of the most important and consistent battles we will fight in our life is the fight for happiness. Happiness takes work, but I believe it is achievable for everyone.

The people who follow me on my social media often post comments such as, “Lindsey makes me happy” or “It’s so great that Lindsey isn’t afraid to be herself.” My followers revere me as an icon of happiness; however, just a few years ago, I was a very different person than I am today. In my college years, for no particular reason, I slowly sunk into depression and anorexia. The change took over my life so slowly that I never detected its intrusion into my personality. When I saw people who exuded genuine happiness, I looked at them longingly, wishing I could be like them. All the while, I assumed that some people were just lucky; I thought that some people were happy and some people just were not.

Happiness takes work, but I believe it is achievable for everyone.

In my mind, I knew I was ugly, I knew I was worthless, I had no purpose and I frequently hid in my room, crying for no reason while my roommates laughed in the living room. It was ludicrous to think that what I was feeling was normal. I share this with you not to call for your pity, but for two reasons: First, some people may strongly relate to these feelings but not realize that what they are feeling is not normal and more importantly, that they can change. Secondly, I never could have become a successful, world-traveling violinist if I had remained in this self-destructive state. I am delighted to report now that I am full of happiness. I better understand my mental health battles so I can combat them when I see them sneaking back into my life. What I am saying is that if I could go from having no motivation and hating myself, to being driven and full of positivity, so can you and so can your friend, daughter, or son.

A study from 2014 shows that depression affects 350 million people worldwide and less than half will seek help. In order to solve this world epidemic, I feel the first hurdle to cross is the stigma surrounding mental health. People are ashamed to admit to themselves, let alone their families and friends that they could be suffering from an actual problem. If they do admit they have depression, anxiety, or multiple personality disorder, they feel broken or tainted by an irreversible label. So rather than confronting the inner issues, most people are coursed into shame and silence. To this point, Oprah Winfrey stated, “The only real shame is on us for not being willing to speak openly. We need to start talking, and we need to start now.” Covering up or hiding is the worst remedy for mental disorders. It is impossible for someone to change if they do not realize that they have a problem and if they are too scared to seek help.

The truth is that 26 percent of adults are living with diagnosable mental disorders. Even many people we admire have overcome or currently deal with their own mental health issues: Lady Gaga, Lilly Singh, and Emma Thompson, just to name a few, battled with depression and/or anxiety. Elton John struggled with bulimia, and Carrie Fisher shared that she is bipolar. These brave individuals are not the exception, but rather they represent a rising surge of awareness.

I have been asked countless times how I came out of my mental disorders. In my own story, thankfully, I woke up to the fact that I had a problem—that something was wrong in my mind. In my case, it was anorexia and depression. I hated the names and the fact that I was diagnosable, but I realized that if could pin point a problem, then I could change it; I knew how to solve problems. It was suddenly so clear. I had practiced my entire life to turn the unnatural and painful process of scratching away at my violin into second nature movements that result in beautiful music. If I could train my physical body, why was my mind any different? When we see a ballerina who spins perfectly on point, we know that she has worked her entire life to master this skill; however, when we see a mother of five patiently chasing after toddlers while holding a crying baby, we just assume she has the gift of patience. Attributes are learned the same way any skill is acquired—through practice.

Covering up or hiding is the worst remedy for mental disorders.

Throughout our lives, we develop beliefs about ourselves as a result of life’s situations.  We develop these beliefs to protect ourselves from pain, to find the consistency, and to give us meaning and connection. These beliefs manifest themselves through patterns in our behavior and form how we define ourselves: “I am shy,” “I am depressed,” “I am awkward,” or “I have nothing to add so I should stay quiet.” Once we have developed beliefs about ourselves, even if they are negative and destructive, the human personality will cling to them. Our mind attaches meanings to life, which allows us to make both conscious and unconscious decisions. The hardest definition to redefine is the subconscious definition we’ve given our own identity.

Changing our thoughts and inner identity is much more difficult than changing our physical body. It takes time and consistent efforts to change our beliefs. Here are some of the practices that I adopted:

I began to listen to my inner voice. Wow, I said terrible things to myself CONSTANTLY. Not only was I mean to myself, but also instead of saying statements like, “that was dumb,” I would say, “I am dumb.” I said things to myself that I would never ever say to anyone else. They were a never-ending string of criticisms and it was no wonder I felt worthless. I had been practicing and faking worthlessness till I made it. So I worked to re-train my brain to think differently. I would catch myself mid negative thought and I would turn it around and say something positive. After a while, the negativity began to weaken and the positivity became stronger.

Standing in a power pose (imagine Superwoman: chest out, shoulders opened, fists on hips, feet shoulder width apart) can actually change your body chemistry. In her 2012 TED Talk, Amy Cuddy explains that testosterone will increase and cortisol (stress hormone) will decrease just by standing in a power pose. Similarly, there are 43 muscles in the human face and merely by smiling, your brain releases endorphins that make your mind think you are happy. It wasn’t enough just to say the words. I found it much more effective when I would also do physical actions. I would smile as I complimented myself, and I would stand with my head held high and shoulders back when I said empowering statements.

Prepping for the day

The same way people prime their bodies physically by working out, showering, and getting ready, we need to prep our minds. I personally found the practice of meditation to be extremely beneficial for me.  Visualization is another tool that has immensely helped me. The brain doesn’t actually know the difference between reality and imagination; if it sees it, it assumes it’s real. Visualize the things you are grateful for. Visualize yourself being the kind of person you want to be: confident, funny, or driven.

If I could train my physical body, why was my mind any different?

When I was in high school, I was a runner. For the regional race, I wanted to decrease my best half-mile time by a significant amount. My coach recommended I visualize. Although I thought it was silly, I repeatedly imagined running a perfect race with my stopwatch in hand. When I crossed the finish line of the regional race, they handed me my time card and I was shocked that I had finished with the exact time that I had visualized getting. Humans are programmed to move towards what they focus on. It is extremely impactful to visualize and focus on where and who you want to be. By doing so, you will naturally move towards it. Spend 10 to 20 minutes at the beginning of each day visualizing or meditating.

I went to a personal therapist and I continue to speak to a therapist once every other month. There is no shame in therapy and there are many different types one can try.

We all have definitions that we feel are “our true self.” Who we think we are is who we are. But what if we could redefine ourselves? I am ________ and I am full of joy, confidence, or optimism. How would our lives be different?

As a recovering anorexic, I believe that happiness is achievable for anyone. I don’t pretend to be an expert and I am nowhere near perfect. The above comments merely stem from my experiences and my limited studies. But by using these ideas, I continue to work for my happiness on a daily basis. It has been the most important thing I have ever invested my time in and it has enabled me to choose and become who I want to be.