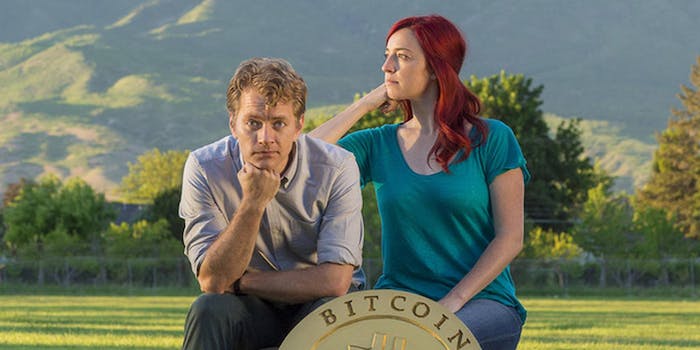 These newlyweds plan to live for 90 days entirely on Bitcoin

For a documentary called Life on Bitcoin, the Craigs will hand over their credit cards after their honeymoon in favor of virtual currency.

This summer, soon-to-be newlyweds Beccy and Austin Craig will attempt to survive for three months entirely on Bitcoin and document the experiment for their film, Life on Bitcoin.

Beginning on July 27, the Craigs plan to pay for everything from groceries to life insurance exclusively with the digital currency. Both freelancers, they will attempt to convince employers to pay them in Bitcoin. Provided they can find a willing travel agent, they’ll go abroad as well.

“Right now,” reads the film’s description, “you can buy anything online from soap to illegal drugs with bitcoin—you can date online, setup a WordPress blog, buy bee-keeping equipment, or even buy gold. It’s come a long way, but could you survive using just Bitcoin in the REAL world?”

Certainly, digital payment systems are on the rise. In Kenya, for example, 30 percent of the country’s GDP flows through the digital payment system M-Pesa (which is still rooted in traditional banking). And worldwide, the mobile payment market is expanding rapidly. “We expect global mobile transaction volume and value to average 35 percent annual growth between 2012 and 2017,” reported the tech research firm Gartner, “and we are forecasting a market worth $721 billion with more than 450 million users by 2017.”

Still, uncertainty remains about Bitcoin’s ability to claim much of this market share. Earlier this year, Bitcoins quadrupled in value, reaching a peak value of almost $270. But then, about a month ago, the market crashed, plummeting to $60 a coin. “Bitcoin only works for payments if you can be reasonably sure that its value will remain reasonably steady for at least the next hour or so,” wrote Reuters columnist Felix Salmon. And as of yet, you can’t.

Life on Bitcoin is the latest of a long line of survive-only-on-X-style projects that attempt to elucidate the limits of emerging technologies. “The experiment is pretty interesting and recalls some early ecommerce experiments in the late 1990s and early 2000s,” wrote Stuart Thomas on Memeburn, “where people tried to survive only on stuff they could buy online.”

In the case of online shopping, those early experiments now serve as a record of the fact that there was once a time when one couldn’t conduct all of their business online. It’s unclear whether Bitcoin will ever become as widespread.

The Craigs hope to fund the documentary with a $70,000 Kickstarter, and they’ve raised almost $26,000 in the first week. Ultimately, the success or failure of their experiment may, in large part, depend on the market value of Bitcoin in late July when they exchange their cash for the volatile digital currency—in other words, a matter of chance.

Photo via Life on Bitcoin