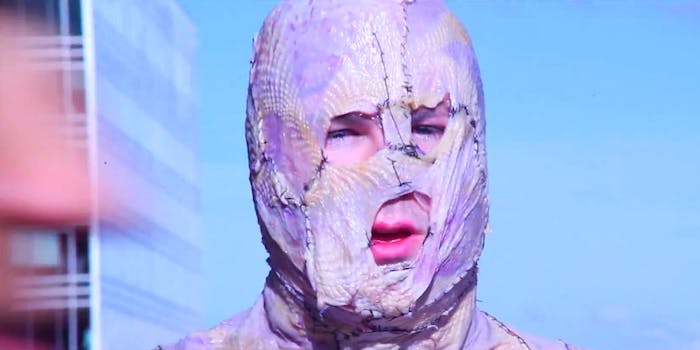 It's even more hideous than you think.

You weren’t hoping to sleep tonight, were you? No? Good. Because this week, an artist has taken to strolling around the streets of London dressed in a “gimp suit” made out of chicken skin.

Part of an “experiment that examines the relationship between identity and its commodification through social medias” called FLESH, performance artist Lewis G. Burton has to be literally sown into the suit by his colleague Victor Ivanov before he goes out for a morning stroll.

Astonishingly, the Evening Standard reports, Burton can only wear the suit for 45 minutes at a time—“or he would suffer from salt-poisoning, as the grim costume is made up of six-month-old preserved chicken skins.”

The project’s website gives more of an insight into the philosophy behind the performance artwork, claiming that “by creating an entity from chicken skin, a commodified object in itself, the artists are then introducing it into the social sphere, both online and offline.”

“This abnormality creates a stimulus for the general public to interact with,” it goes on, “by allowing them to adopt FLESH as part of their cyber identity.”

What is this I don’t even

If you’re desperate to get yourself a memento of FLESH—though only God knows why you would—then you’re in luck: The artists are running an online store. Offerings include wall clacks, MacBook skins, shower curtains and pacifiers—all printed with the project’s signature chicken flesh. Ivanov says his “dream is to have the flesh persona and identity on lots of products in pound shops, face paints and paper cups—nothing expensive, rubbish that is cheap and nasty.” This is a nightmare from which there is no awakening. (Screengrab via flesh.boutique)

Ivanov and Burton have also done a video interview with Art Map London, giving art fans a first look at the man behind the mask. Burton in the flesh. (Sorry.) (Screengrab via Art Map London)

Ivanov talked to the Evening Standard about the pair’s experiences with the project: “Tourists don’t expect it. People who are more local, they are very polite. They were visibly shocked. In Trafalgar Square somebody licked the suit,” said the 30-year-old artist, “It was horrendous to watch. People would touch it as well and want to check if it was real.”