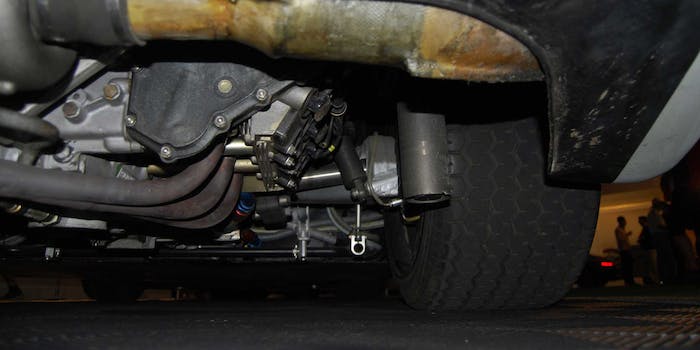 Is your privacy being violated if someone puts a GPS tracker on your car? It's complicated.

Theresa Troeckler didn’t know the voice on the other end of the phone. Whoever it was, they told her to check underneath the back of her car for a black box that shouldn’t be there.

What she found was a high-accuracy GPS tracker recording her vehicle’s every move.

It didn’t take long for Troeckler to first find the box underneath her car. Near the passenger-side back wheel, a fist-sized black box attached by magnetic case clung onto the car’s frame. When the police arrived, they identified the device as a World Tracker Enduro Pro, a commercially available GPS tracker sold in spy shops and meant to be hidden in cars.

The World Tracker is advertised as “ideal for covert tracking!”

The anonymous caller was right. Every time Troeckler drove her car from her south Illinois home, someone was watching closely. They knew where she went, when, and even how fast she got there.

Now, three years and one lawsuit later, a judge has ruled that the tracker didn’t violate Troeckler’s privacy despite how closely it watched her. The Enduro Pro fits in the palm of your hand or in a small magnetic case.

The World Tracker can last up to six months on a single battery charge. Whoever placed the tracker was able to receive remarkably accurate reports on Troeckler’s movements on their smartphone or Web browser.

Police would later find that the World Tracker had been removed and reattached multiple times, suggesting that the battery may have been changed to keep the surveillance going for extended periods.

Tracking The World, Inc., the company that sells the World Tracker, eventually gave up the name of that device’s owner to police after what Troeckler said was months of stonewalling by the company.

The name, Mark Stueck, led to a tangled web that clearly implicated one man above all else: Donald Zeiser, who was once Troeckler’s son-in-law before her divorce.

Zeiser, for his part, didn’t deny that he paid Stueck and others to place the GPS tracker on Troeckler’s vehicle. Instead, when Troeckler sued in him civil court, Zeiser’s attorney prepared another argument entirely: Zeiser wasn’t doing anything wrong.

The first count of Troeckler’s lawsuit was for a special form of invasion of privacy called “intrusion on seclusion.” To qualify, Zeiser would have to be intentionally invading Troeckler’s private affairs in an offensive way that causes mental anguish or suffering. Every part of that legal definition must be met.

Zeiser’s attorneys insisted his client did nothing wrong because placing a GPS tracker on someone else’s car without permission is not an invasion of privacy.

“As a matter of law, [Troekler] cannot allege intrusion into private matters with respect to the tracking of Plaintiff Theresa Troeckler’s vehicle because a vehicle travels only through public spaces and can be readily observed by other drivers, pedestrians, and members of the public,” Zeiser’s attorney wrote in a motion to dismiss.

Zeiser’s team cited another case, Schiller v. Mitchell, in which a similar lawsuit was dismissed because a cameras pointed at a neighbor’s house only ever filmed areas “visible from [the] street or other public spaces.”

Similarly, Zeiser’s attorneys argued, the GPS tracker was only gathering information that any pedestrian on a public street could gather, too.

What they left unsaid was that the hypothetical pedestrian would have to closely follow Troeckler’s car for six months straight—and that’s just on a single battery charge—to gather the level of information collected by the World Tracker.

Even though Illinois courts “have not specifically addressed the placement of a GPS tracking device in the context of this [law],” Yandle wrote, “other jurisdictions provide guidance.”

In New Jersey, a case cited by Yandle involving a woman placing a GPS tracking device on her soon-to-be ex-husband’s car in order to investigate “suspected infidelities” was dismissed after it was deemed not an invasion of privacy. The court decided that, as long as the ex-husband didn’t drive anywhere private or secluded “where he had a reasonable expectation of privacy,” then then there was no privacy to invade.

Troeckler’s attorney argued that Zeiser violated her Fourth Amendment rights by using the GPS-tracking device. According to the 2011 Supreme Court case United States v. Jones, the use of such a device by police is equivalent to a warrantless search. The judge disagreed that Jones applied in this instance.

Agreeing with the defense, the judge has dismissed the invasion of privacy claims by Troeckler. The case is still ongoing.