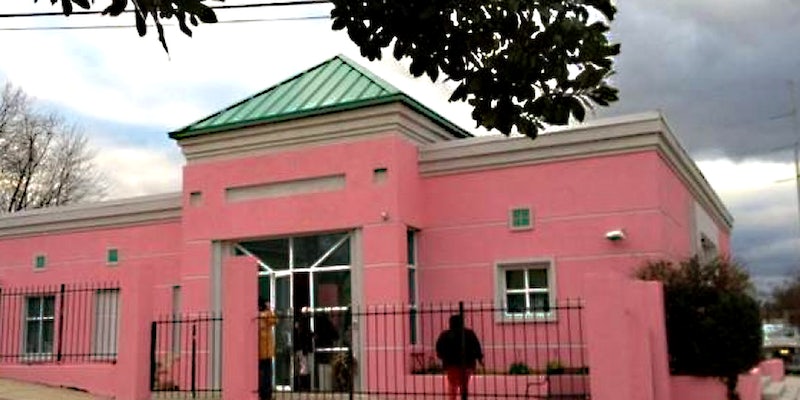 Life at the last abortion clinic in Mississippi

The Last Abortion Clinic was created by volunteer clinic escorts last week as a way to document the state’s war on reproductive rights via social media. But the Jackson, Miss., clinic has been fighting an uphill battle for much longer. In April, a federal judge blocked a portion of a proposed state law requiring doctors at clinics to have admitting privileges at local hospitals, which allowed the clinic to stay open for the time being.

The organization’s YouTube page gives the clinic’s supporting cast of characters some screen time. There’s Derenda, the hula-hooping woman who brings lunch to clinic escorts. There’s Roy, the “resident anti-choice extremist,” who blocks patients from getting out of their car. There’s Tanya, a spokeswoman for Pro Life Mississippi. Today, volunteer escort Laurie Bertram Roberts posted a blog speaking about her experience in the last few months:

“I often have patients and their families ask me why I would volunteer to be harassed by strangers. My answer is simple. If I can take some of the harassment so patients don’t have to then that is fine with me. I remember what it was like to walk through protesters to access a clinic. Those people knew nothing of my life but felt qualified to condemn me. No one deserves that.”

Roberts tells the Daily Dot they started the YouTube channel back in February, and eventually the website followed.

“We’re always trying to think of ways to get the true story of what’s happening in Mississippi out, at the clinic, and at the grassroots level,” she said. “The antis make it seem like they come to the pray for these poor women who are being taken advantage of by the abortion industry. People who have never been to a clinic don’t see what happens.”

Her two teenage daughters are also clinic escorts and have had to deal with “antis” on a different level, Roberts said, because they are young and black. Still, she wants them to have their voices out there; they’ll be writing about their experience for the blog as well.

“There’s empowerment for the person putting [the info] out there, and the people reading about it,” Roberts said. “And it can be detrimental when someone decides to turn that into lies. But we can also put out the truth.”

Photo via The Last Abortion Clinic