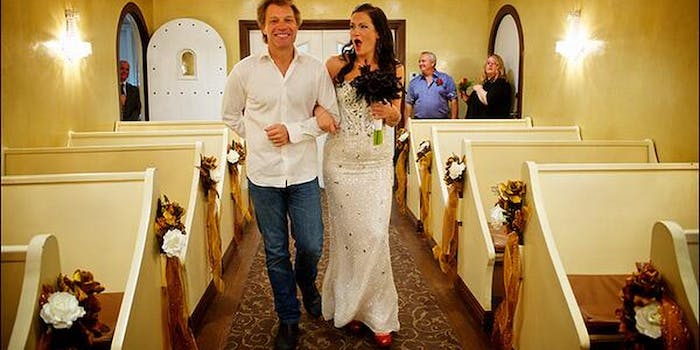 ‘I’ll be there for you’: Bon Jovi delivers on bride’s request

Do you want Jon Bon Jovi to show up at your wedding? Did you consider just asking?

Do you want Jon Bon Jovi to show up at your wedding? Did you consider just asking?

Australian native Branka Delic discovered this for herself on Oct. 12. Prior to her nuptials to fiancé Gonzalo Cladera at the Graceland Wedding Chapel in Las Vegas, Delic created the website BonJoviWalkMeDownTheAisle.com and its accompanying Facebook page.

“Bon Jovi…we’re begging you….make this wedding happen. There is plenty of time in the afternoon for you to come and walk her down the aisle before the show. We’re living on a prayer and we want you to come lay your hands on me and walk me down the aisle!” she wrote on the website.

Bon Jovi was in town on her wedding weekend as part of his “Because We Can” tour.

Her campaign, which began on Aug. 30, steadily grew. And on the day of the wedding, you can imagine the shot to the heart she must have felt when Bon Jovi actually showed up—and obediently walked her down the aisle. 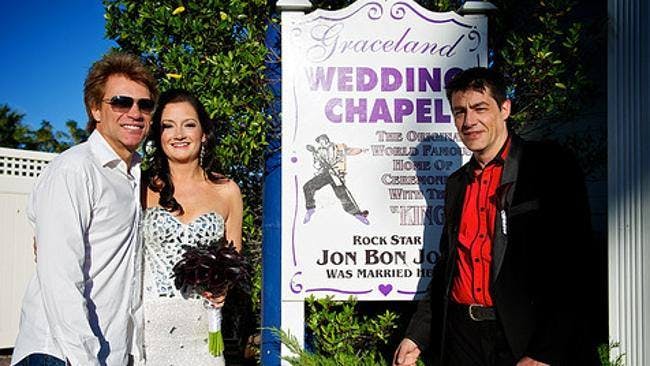 Photo via Bon Jovi, Walk Me Down the Aisle?/Facebook

While the singer didn’t perform at the wedding, he did stick around to pose for pictures with the bride and groom. He even tweeted a photo and congratulated the newlyweds.

Congratulations @branksd! May you & Gonzalo have a lifetime of happiness, love & memories together – ALWAYS! pic.twitter.com/JuN8eNKfdi

Their ceremony may have also been Bon Jovi’s way of answering “who says that you can’t go home?” He himself was married at the Graceland Wedding Chapel to high school sweetheart Dorothea Hurley in 1989.