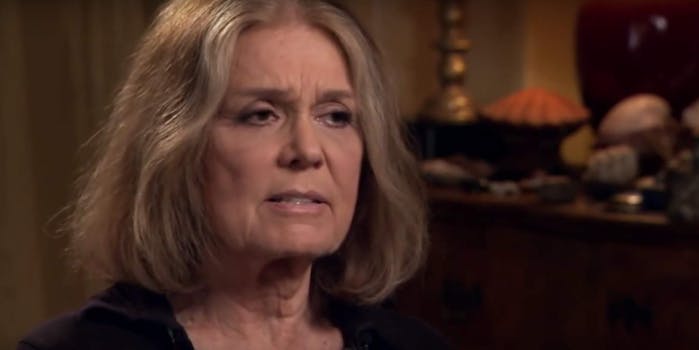 The feminist icon appeared in a recent interview with the CEO. And that didn't sit well.

Gloria Steinem has been causing controversy since the 1960s, and 2016 has proven to be no different. She’s promoting her new book My Life on the Road, which is dedicated to the doctor who gave her an abortion; a Bill Maher gaffe landed her on every site’s homepage earlier in February; and now an interview with the CEO of clothing company Lands’ End has made her the enemy of conservative customers.

The company pulled the interview and is apologizing—but not to Steinem. So how did it happen?

The feminist icon recently sat down with the new Lands’ End CEO Federica Marchionni as part of the company’s “Legends Series.” Customer then received a catalog with Steinem’s interview and photo spread.

Lands’ End was also selling a customizable tote on the website on which customers could get a patch with the ERA Coalition’s Fund for Women’s Equality logo in honor of Steinem’s work. They promised to donate $3 of the monogram fee to the fund.

All of this did not sit well with the company’s more conservative shoppers. A reader letter shared on the American Conservative expressed outrage that she was forced to look at Steinem while looking for “a bathing suit that will cover [her] middle aged lumps.”

Meanwhile here in the good old USA, I just received a clothing catalog from Lands End. OK – good so far, nice clothes, modest, feminine – wait – what the ! A three page spread in their latest catalog on Gloria Steinem “Legend”.

Has this country come unhinged? I can’t even shop for clothes without being exposed to agitprop? Worse – the catalog is planning on donating proceeds from its sale to Gloria.

She also admitted to feeling “nervous” because she said the company is either “clueless,” indifferent about losing middle-aged women like herself, or because the company is pandering to “the millennial demographic.”

This reader was not alone: Lands’ End’s Facebook page was flooded with angry customers who threatened to take their spending power elsewhere.

Lands’ End didn’t hesitate to backtrack on its Steinem venture. The interview has been taken down online, and any traces of Steinem in muted casualwear are gone. In a statement provided to the Daily Dot, a spokesperson explained the rationale:

Lands’ End is committed to providing our loyal customers and their families with stylish, affordable, well-made clothing.  We greatly respect and appreciate the passion people have for our brand.  It was never our intention to raise a divisive political or religious issue, so when some of our customers saw a recent promotion that way, we heard them.  We sincerely apologize for any offense.

It’s a victory for Steinem opponents, but it’s impossible to please everyone. Other customers are now taking to the company’s Facebook to express their disappointment that Lands’ End changed its tune.