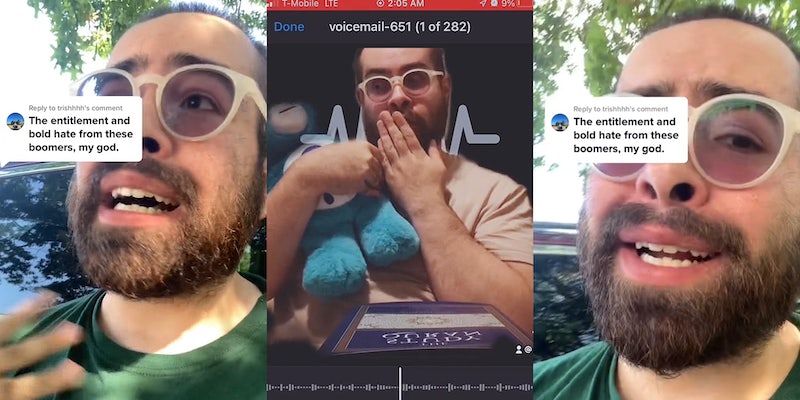 ‘I will find you wherever you go’: Renter mocks ’threatening’ voicemail he received from landlord after she speculates he’s moving out

'I have your social security number. ... I know a lot of people.'

A renter says he recently received a “threatening” voicemail from his landlord, so he decided to share it on TikTok.

The renter, named Jeffrey (@serephivm), seems to have received the voicemail on his 30th birthday on Aug. 21. He posted the voicemail audio in a recent TikTok video with the on-screen caption, “My landlord decided to threaten me and my husband in a 3 minute voicemail.”

In the voicemail, the woman says she didn’t expect Jeffrey to answer her call, but she heard from his neighbors about a “big burnt spot” on his lawn. She says he seemed to be loading up his stuff into several vans.

“So I guess this means you’re moving out,” the person on the other line, who Jeffrey claims is his landlord, says in the voicemail. “But I have a warning for you. I’ve already talked to my attorney.”

She tells Jeffrey he’s a young man who shouldn’t want a “bad record.” Then, she warns him that no matter where he’s going, she has his social security number and knows he works for Apple.

“I know a lot of people,” the landlord says. “And I will find you wherever you go in terms of legal proceedings. So I’d advise you not to do anything that you’re going to be sorry for.”

She adds that the stove in Jeffrey’s rental home should be left behind if he is leaving. She says he hasn’t paid for it nine times out of 10, and he probably hasn’t paid for the washer and dryer, either. She warns him not to think that he’s making a “smart move.”

“So you have a good journey, and may God be with you,” the woman says. “Because people who do things like I think you’re about to do, they don’t have good luck.”

She ends the voicemail by assuring Jeffrey that he has her good wishes—but then again warns him she will find him and get her money, and it won’t be good for his record.

As of Thursday, Jeffrey’s video racked up about 1.5 million views on TikTok. Jeffrey wrote a comment on the video seeming to indicate why he plans to move out from the rental: “Our lease is up September 30 and she hasn’t repaired a single hazard issue since living here. And wants to raise rent for next year!”

Viewers had a range of reactions to the voicemail. Some urged Jeffrey to immediately seek legal action. “That voicemail is full of threats I’d call the police and file a restraining order,” one concerned viewer commented.

Some viewers said that although the landlord claimed to have spoken with her lawyer already, everything she said in the voicemail was the opposite of what a lawyer would recommend saying. “Her lawyer after hearing the voice mail ‘You said WHAT??'” another viewer mocked.

Others were confused by how she ended the call. “Threatens you then calls on God to be with you,” another user wrote with a laughing emoji.

Jeffrey linked a GoFundMe page in his TikTok bio, explaining his situation further. On the page, he said that he and his spouse rent a basement apartment in a house full of health and safety issues, including mold, sewage leaks, pest infestation, and kicked-in doors. He claimed the landlord refuses to fix those issues because “she not giving us a new kitchen.”