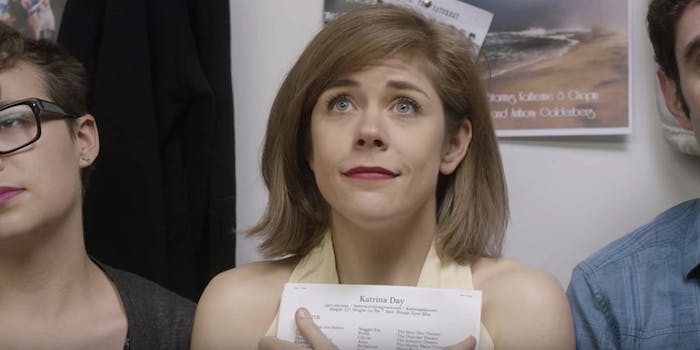 The popular blog turned webseries brings the laughs about a subject that is no laughing matter.

It reads like a parody, but that’s an excerpt from an actual casting call which was shared on the popular Tumblr, Lady Parts. Actress and writer Katrina Day started the blog last year after she got fed up with the absurd, sexist casting calls actresses encounter in their quests for work.

“Lady Parts calls bullshit on the insidious sexism that lurks in character and project breakdowns on popular casting websites,” she explains on the blog, which has 25,000 followers.

Most recently, Day has turned to YouTube as another platform for forcing the industry to take notice. Lady Parts: The Webseries is a crowd-funded extension of her blog—a feminist comedy about the inequality and chauvinism female actors experience every day. The entirety of season one—created by an all-female core production team—was released on YouTube on Tuesday in 10 short, snarky episodes that bring to life the issues highlighted on the Lady Parts blog.

Lady Parts highlights the particular struggles of young or new (read: powerless) actresses. We can turn on the TV and see plenty of smart, respectable female characters, but Lady Parts sheds a light on just how difficult it is to get to a place of respect as an actress and as an on-screen character. Episodes like “You’re Never Fully Dressed,” in which Day is asked to re-do an audition without her cardigan over her dress (“Why hide the goods?” the casting agent asks), give us a glimpse into behavior which would be labeled sexual harassment in the corporate world:

Exposing sexism within the casting industry is essential to creating a culture change, Day told the Daily Dot. “Young actors who might not know better will no longer be silenced with, ‘That’s just the way it is.'” She continued:

“The intention of this project has always been to encourage actresses to advocate for themselves, to choose which roles and projects to take according to their own standards. I hope that my fellow actors and actresses feel empowered by the series, and realize that we can bring about change from the ground up. We don’t have to wait until our careers are ‘established’ to start speaking up.”

But aspiring actresses aren’t Day’s only target audience. Lady Parts speaks to men and women alike who feed into the exploitation in the industry, and hopes they will learn it is not benefiting anyone. “If you’re hellbent on only employing or giving screen time to straight white guys, you’re not only missing out on a huge amount of talent, you’re also going to end up with a product that is boring as hell,” she said. “Not because the straight white guy point of view is inherently boring, but because we already have so much of it. No one wants to do away with stories about men or by men. We just want more stories to choose from.”

“Some people in the industry brush away complaints of sexism and discrimination with excuses like, ‘It’s always been this way’ and, ‘That’s just showbiz,'” Day said. “I want to take those excuses away and force the industry to own up and do better.”