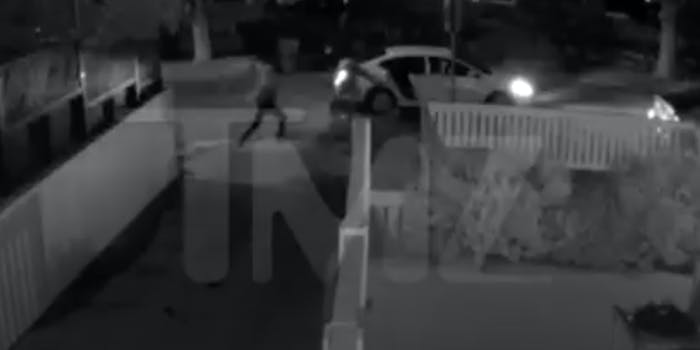 The video shows Ryan Fischer putting up a fight against the suspects.

On Wednesday night, Lady Gaga’s dog walker was shot and two of her three French bulldogs were taken in a robbery, with the third dog escaping and safely recovered by police.

Though the dog walker, Ryan Fischer, is now expected to make a full recovery, the pop star is offering a $500,000 “no questions asked” reward for the return of the dogs.

She’s created an email, [email protected], for people to provide information on the whereabouts of Koji and Gustav, the two dogs taken on Wednesday night.

Via the #GetWellSoonRyan hashtag, fans and well-wishers shared images of Fischer interacting with the missing dogs.

And this video from the @alluregagaa account, hoping for the dogs to be “found safe and well,” shows all three in action with Lady Gaga.

According to TMZ’s reporting, Fischer had the three dogs for a walk in Hollywood just before 10pm, “when one gunman — and possibly more — came upon him. We don’t know what was said, but the dog walker was shot and the gunman made off with two of the dogs.”

TMZ later obtained a video from a neighbor’s surveillance footage that shows the altercation.

In the video, two men can be seen getting out of a vehicle, with one saying, “give it up” to Fischer. Fischer screams for help and yells the name of one of the dogs, Koji, before one of the men shoots him, prompting him to land on the sidewalk. The two men get back into the vehicle, each holding a dog. One of the dogs can be heard yelping, while the third runs back to Fischer.

The initial report added Lady Gaga is currently in Rome working on a movie and is understandably upset by the news.

And the Gaga Now account noted, in addition to the report about Fischer’s anticipated recovery, that “LAPD’s Robbery-Homicide Division has taken over the case,” adding that, “RHD is tasked with investigating high-profile cases in L.A.”

That account also shared details from the LAPD about two suspects in the incident. According to the tweet, one suspect is male, wearing a black hat and black hooded sweatshirt, and a second suspect also wore a black hat and all-black clothing. The two also were reportedly seen exiting a white Nissan Altima.

Hassan Chammout’s tweet about the incident, with video of a fight at McDonald’s captioned with “Me when i find the people that shot and stole Lady Gaga’s dogs,” was typical of online reaction to the news.

Many expressed outrage at the crimes on Lady Gaga’s behalf, although Communist Twitter had its own proletariat take on matters, with @red_baiting declaring, “There are so many things about this story that makes me hate rich people even more. She’s in ITALY during a pandemic. Her dog walker got shot because people are so desperate for money they’re stealing dogs. She’s offering $500,000 reward,” before adding, “destroy the rich.”

This is a developing story.