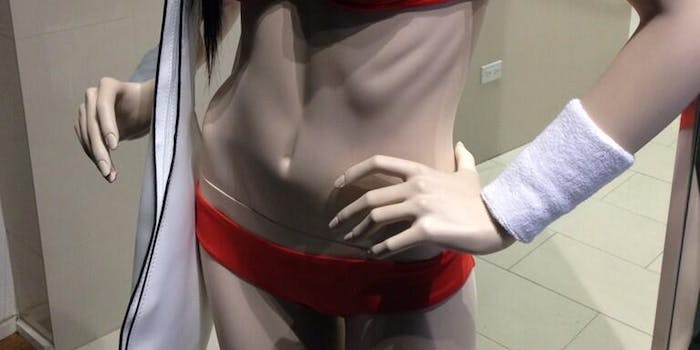 Mannequins can be super-thin, but bony crosses a line.

Hashtag activism works, at least when a brand’s public image is at stake, anyway.

After seeing a skeletal mannequin in the window of a La Perla store in New York, Twitter user Michael Rudoy tweeted a photo to Seth Matlins, an advocate for truth in advertising. From there the photo spread across social media, with many people expressing horror at the kind of body shape La Perla apparently thought was acceptable for a storefront mannequin.

How does #LaPerla think ribs on a mannequin is ok?! @SethMatlins pic.twitter.com/NPYMLQxhNc

While the mannequin is technically no thinner than most storefront dummies, its prominent rib cage, protruding hip bones, and concave stomach made its super-thin frame obvious enough to be disturbing. It’s a kind of uncanny valley for body image: skinny mannequins are literally just window dressing, but when they start looking too realistic and human, they become creepy.

It took less than a day for La Perla to take notice of the Twitter protest on the #NotBuyingIt hashtag, which is often used to point out instances of sexism in advertising. La Perla then issued a statement saying that the mannequin had been removed, adding, “We are in the process of redesigning all La Perla stores with a new concept image and the mannequins that are currently displayed in our US stores will no longer be used.”

So, score one for hashtag activism. But we doubt this will make much of an impact on the overall trend of using super-thin body types to sell women’s clothing.