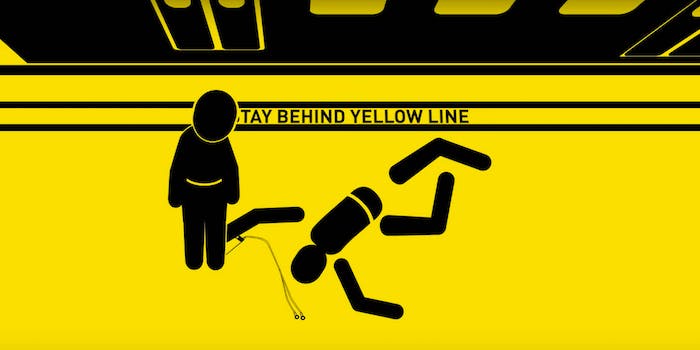 Luckily, they're good for GIFs.

It’s fun when corporations and public services discover memes and are like, “Oooh, we can do that too!” This time, it’s Metro Los Angeles, whose new gruesome “Safetyville” PSAs are ripe for GIF-ing.

For instance, this moment when a dude straight up steps over a dismembered body to get to work on time.

ok in this LA Metro PSA, not only does a guy get dismembered but another guy LOOKS DOWN THEN JUST BOARDS THE TRAIN. pic.twitter.com/H0rVfjRTao

The six videos show stick figures disobeying basic subway-safety rules—and getting horrifically dismembered in the process. The videos were reportedly inspired by Melbourne Metro’s famous “Dumb Ways to Die” campaign. “We weren’t trying to copy them, per se, but wanted to present something that’s a little catchier and a little more impactful [than what you would normally see],” Metro spokesperson Anna Chen told LAist.

The videos also suggest that if you get decapitated in L.A., sorry, Angelenos will probably step over you. It also suggests that for a place named Safetyville, far too many people are losing limbs.

However, the good news is that if the campaign gains the popularity of “Dumb Ways to Die,” there will be a Safetyville game, stuffed toys, and keychains. Hooray for plush severed digits!?