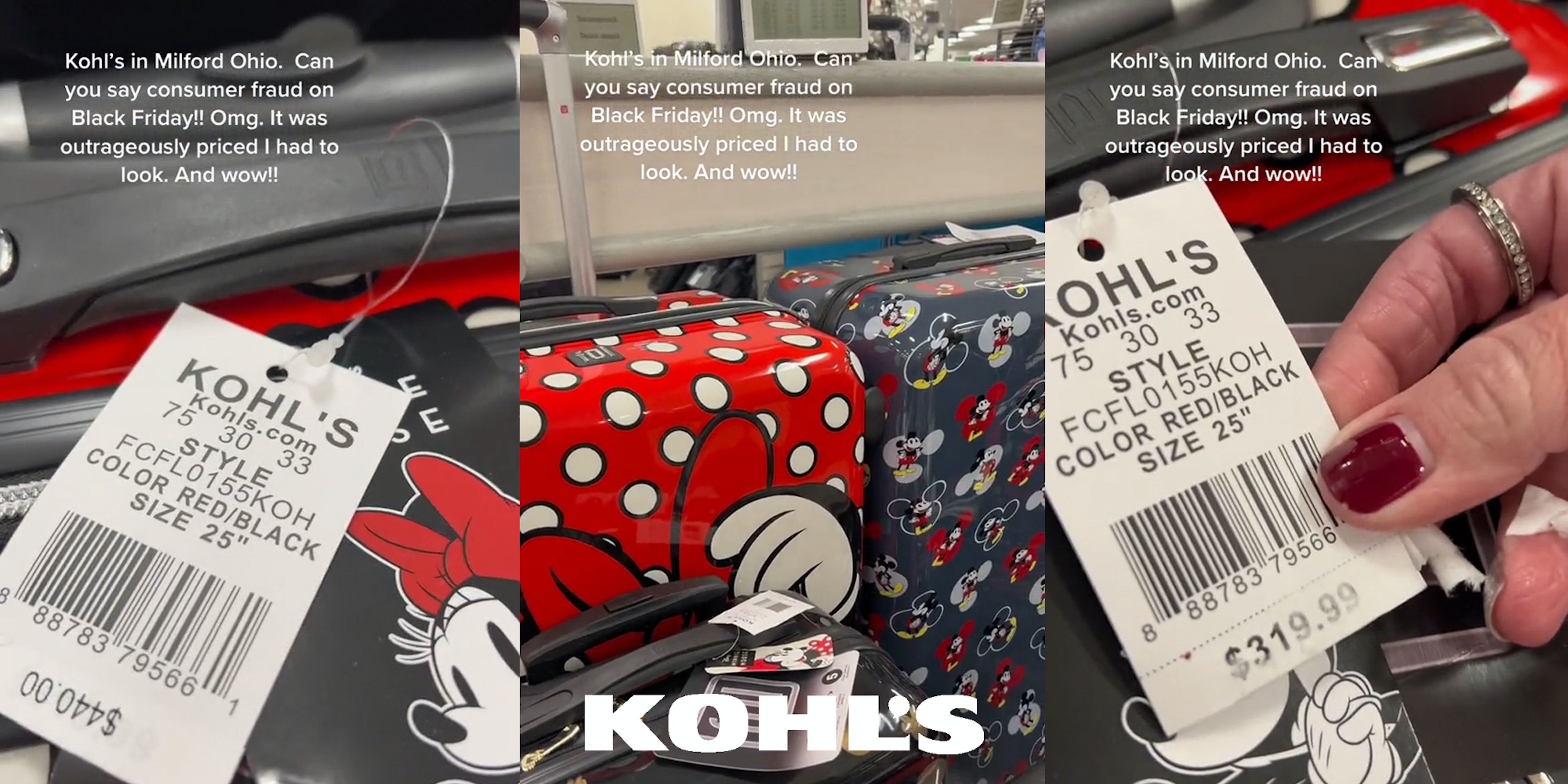 'They send people out almost weekly to change prices.'

A Kohl’s customer is attempting to sound the alarm on what she says appeared to be a deceptive price hike at the retail chain during its Black Friday sale.

In a recent TikTok video viewed more than 300,000 times, TikTok user Trisha Colwell (@trishacolwell0) calls out Kohl’s for what appears to be a price increase on a sale item.

In the video, Colwell shows a display of Disney luggage on sale at Kohl’s for 60% off. She then pans to the price tag which reads $440 and shows that the luggage would be $176.00 with the sale. Next, she shows a sticker being removed from the price tag to show a cheaper original price, $319.99.

“Crazy. Now, imagine if it was 60% off of [$319.99], a lot cheaper,” Colwell says in the clip. (Although Colwell doesn’t show her face on camera, it appears to be her narrating the whole ordeal.)

“Kohl’s in Milford, Ohio. Can you say consumer fraud on Black Friday!!” the TikToker captioned the video.

It’s not completely clear if Kohl’s increasing the price of its luggage is illegal.

In Ohio, there are no state laws that deal directly with price gouging, however state law does ban “‘unfair,’ ‘deceptive’ or ‘unconscionable’ sales practices,” according to Ohio’s Attorney General Office. The Wall Street Journal reports that everyday items are being priced more like airline tickets and gasoline — where prices change frequently. The phenomenon, known as dynamic pricing, is usually in response to “rising production, labor and shipping costs.” Although the ethics of dynamic pricing may be murky, it’s technically legal in most situations.

Price discrimination based on a person’s race, gender, or religion, however, is considered an illegal practice.

Large retailers such as Amazon and Walmart have been known to use dynamic pricing strategies, according to the Journal. The paper also reported retailers like Kohl’s have opted to use electronic price tags in their stores so price changes can be easier and quicker.

Commenters on Colwell’s story pointed out they’ve come in contact with such practices while working retail.

“Unfortunately I work at [Kohl’s] and they do that because when the items [were] sent the price had gone up so they send people out almost weekly to change prices,” one commenter said. “It won’t matter what the tag says, the new price will always be in the system.”

“Stores regularly change prices and instead of making whole new tags they put a sticker of the new price. [It’s] common practice in most retail stores,” another commenter said.

Kohl’s has not responded to a request for comment via email. The Daily Dot reached out to Colwell via TikTok comment.