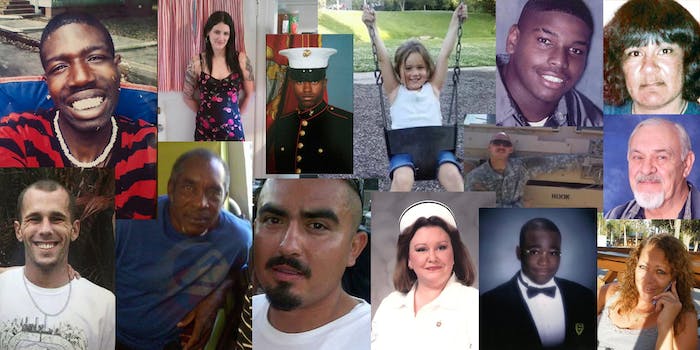 They want to create a completely "unbiased" record of the people who died.

Michael Brown and Eric Garner were far from the only people who died during confrontations with police in 2014. And a new project aims to make the others known with a collection of names and stories of over 1,000 individuals. 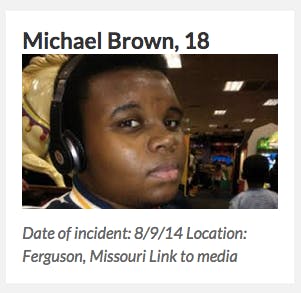 The Carry Their Names database, in the words of the creators, is an “unbiased” look at all of those who died in an incident with police. The project’s website includes the name, age, and photo of all the victims as well as a link to a media source describing their story.

Carry Their Names also breaks the names down into different categories to differentiate the reasons and circumstances that resulted in the victim’s police confrontations. Most victims fall into more than one category, such as killed by an off-duty police officer, suicidal, or veteran.

The largest category is “Struggling with mental stability,” which includes 24 percent of the total fatalities. They define this category as “those who struggle with mental illness or addiction as well as any who were acting distinctly out of character during the incident.”

There are also a startling number of fatalities—125—that came as a result of what Carry Their Names calls a “welfare check,” or a police call to investigate the wellbeing of the person who was killed. Welfare checks include “those who needed either medical or psychiatric help” but “were not committing a crime at the time of police involvement.”

Of the 1,108 killed, 45 were innocent bystanders. In total, just under 7 percent of those who died were women while 93 percent were men.

The site’s creators are asking people to come forward with any information the 4 percent of victims who are unidentified and are also seeking donations to make it a more robust resource.

“Ultimately we wanted to create something that was totally unbiased, just present the facts to the public,” said DiBattista, “and we would love the funding to continue this project.”