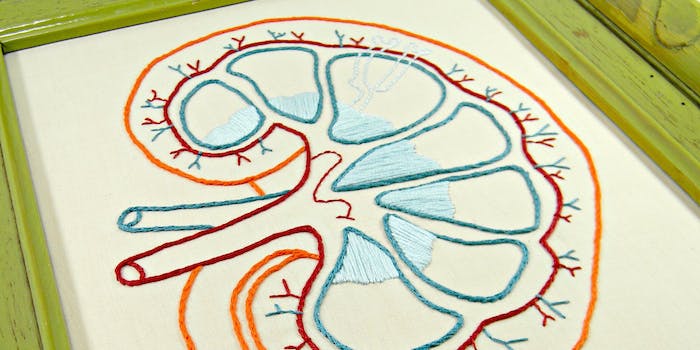 Bob Stewart's wife desperately needed a kidney. So he posted an ad on his truck for a donor.

Bob and Michelle Stewart of Henderson, Colorado have a big problem. Michelle needs a new kidney and the wait time for a donor is approximately five to six years.

Realizing that his wife was running out of time, Bob decided to take matters into his own hands. So he made a sign for the tailgate of his truck to advertise for a kidney donor. 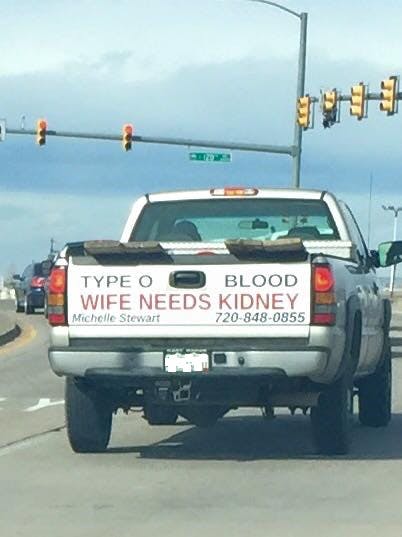 Then a nearby Redditor saw the sign on Bob’s truck, photographed it, and posted it to the site. The sign included the number for the University of Colorado transplant center, which led to dozens of interested parties calling to see if they might be able to lend a hand (or kidney).

The photo was posted on Reddit last Friday, and by Saturday morning, the hospital’s voice mailbox was full. A Redditor named gmx25 seems to be quite close to making things official with the Stewarts. According to his last update, all he needs to do is undergo a round of blood and urine tests before he’s approved to donate.

For the past few decades, Michelle has struggled with system lupus erythematosus. She’s spent her life battling numerous health problems, including two comas, a stroke, a seizure, and temporary paralysis. Then the couple got word in February 2014 that Michelle’s kidneys were failing, and she’d need a transplant.

After living with her diagnosis for 37 years, Michelle’s story appears poised for a positive turn.

“I’m looking for the grace of a stranger,” she told the Denver Post. “I talked to my doctor today, and he said I’m getting close. I can feel my body slowing down. I know that I’m changing. He said that it’s a good thing this happened, because I’m very close to needing the transplant.”