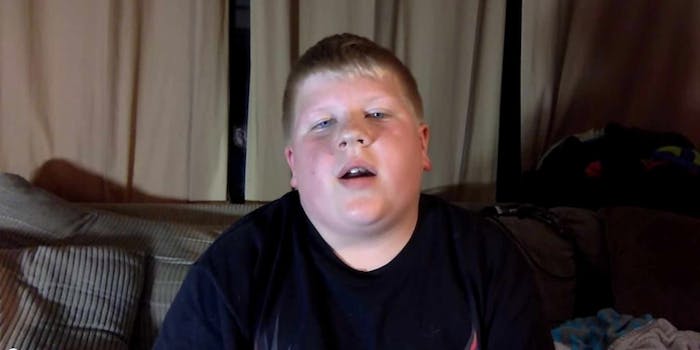 In today’s proof that the Internet can be an abusive hellhole, we give you 11-year-old Logan Fairbanks.

You may know Logan and his father, Josh, from their video “Dad Pranks Son With Shower Scare,” in which you see Josh dunk cold water on Logan while he’s in the shower, singing Katy Perry’s “Dark Horse.” You might also recognize Logan from a video in which his parents filmed his reaction when he found out that he was going to be a big brother.

But in the Fairbanks’ latest video, there are no pranks. Instead, Logan reads a selection of hateful, fat-shaming, violent comments he’s gotten on YouTube, and it’s enough to make you want to shut down the Internet for good.

Logan says he asked his dad to make the video “to encourage other people to not bully” and to help people who have been bullied “to not let words hurt them.” The comments he reads are, unfortunately, familiar to anyone who has been on the Internet for more than an hour, from the declarative “Fat piece of shit” to the scarier “I hope that he dies.”

The comments below the actual video are far more supportive, with YouTube users telling him to “stay strong” and “fuck the haters.” However, even a few trolls emerged in the comment section, with one user writing, “fuck you’re fat, kill yourself.”