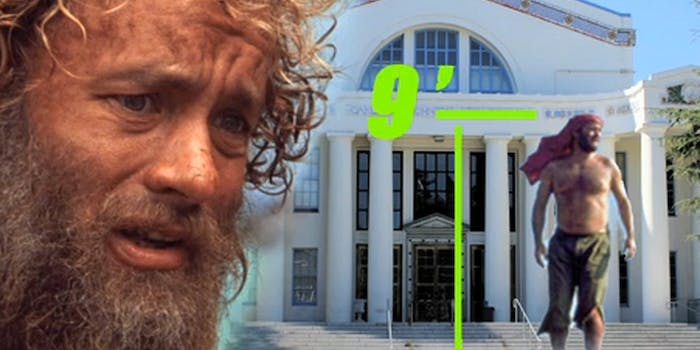 It's for the kids, the three men behind Oakland arts collective Wonderment Consortium claim.

When does art function as something more than just art? When does it inspire and uplift even the most beleaguered community so that it does not just hope for change, but instead finds a way to embody the change it hopes to make?

The three men behind Oakland arts collective Wonderment Consortium hope to answer those questions. Together, they’ve set out to provide the children of Oakland with a figurehead they can admire and model themselves upon, a personality whose presence looms so large it can only be captured in art: Tom Hanks.

In the weeks ahead, the Wonderment Consortium will turn to Kickstarter to raise the funds necessary to build a statue honoring the Academy Award-winning actor.

“Tom Hanks is the spirit of these children,” Consortium member Steuart Pittman told the Daily Dot.

“He’s had the arc that a lot of comedians have had where he’s gone from goofing off and being a comedian to taking on more and more serious roles. There’s a depth to Tom Hanks, and he’s able to inspire and bring weight to even the lightest of his roles. The gravitas that he shows in Joe Versus the Volvano when he’s standing on the precipice of the lava pit… it’s heartwrenching. When you go to these school rallies and gatherings, what we hear is that these children want to be just like Tom Hanks.”

With colleagues Packard Jennings and Scott Vermeire, Pittman want to erect a nine-foot papier-mâché statue of Hanks in front of an Oakland-area high school to be named at a later date. It’s a gift the three activists wish to bestow unto the city’s community, and the price won’t come cheap: The Wonderment Consortium is asking for $10,000.

“The costs in the Bay Area for projects like this can be astronomical,” Vermeire explained to the Daily Dot. “We’ve got warehousing… it’s quite a bit of newspaper. There are all sorts of adhesives that come into play.”

“There will be some wood armature that we don’t even list specifically on the site,” his partner Jennings continued.

“Constructing iconic papier-mâché statues is not so simple that you can commit to a list of materials and themes. As artists, there is so much that is left unknown. We’re trying to build an inspirational sculpture, but it’s not really about reaching our destination. Right now, we’re trying to focus our efforts on the journey itself.”

There’s no telling what an actual papier-mâché statue of Tom Hanks will cost a team of artists—to the Daily Dot’s knowledge, no man has ever set out to erect such a tribute—but one could assume from a smattering of kindergarten art classes that papier-mâché is a decently inexpensive resource, and that the Wonderment Consortium in turn have tried to dupe the city of Oakland.

Since Kickstarter’s terms of service clearly states that the company “is not liable for any damages or loss incurred related to rewards or any other use of the service,” the crowdfunding platform is ripe for potential scammers with a solid pitch or quirky gimmick.

Indeed, the sentiment running through the press is that Vermeire, Pittman, and Jennings are cashing in on a $200 job, that they’re devaluing the importance of community landmarks, and that they’ve created this project in jest: The Inspirational Tom Hanks Statue Kickstarter campaign is a joke campaign unto itself.

The three men making up the Wonderment Consortium say that public opinion could not be more wrong.

“One of the aspects of the project that’s been surprising to us is that we’ve gone about proposing a project that’s lighthearted in concept,” Vermeire said.

“Tom Hanks is such an uplifting and inspirational figure, and oftentimes he plays a humorous and lighthearted character. Because of that, I think that a lot of people have gotten the impression that the project is also lighthearted. That’s fine. I look at so many other Kickstarter projects and see projects of greater value to society, much like ours. Right now, we’re trying to focus on getting people’s money and making this campaign successful.”