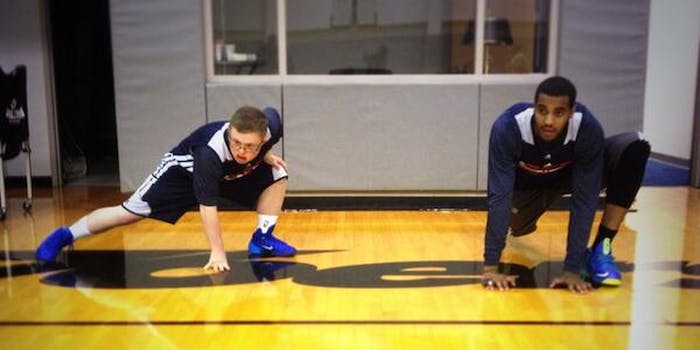 For 2 days, this high school hero with Down syndrome will be an NBA star

The Philadelphia 76ers might not have the best record in the NBA, but they might just be one of the best teams.

The Philadelphia 76ers might not have the best record in the NBA, but they might just be one of the best teams after after signing Bensalem High School senior Kevin Grow to a two-day contract.

Grow, who has Down syndrome, is the manager on Bensalem’s basketball team, but he never got the chance to play himself until the final two games of his high school career. He hit a free throw and a two pointer in the 90 seconds that he played, and for Senior Day, his coach put him in for the final two minutes of the game.

It wasn’t much time to work with, but Grow made it count. He made four three-point shots and scored more points than many players do in an entire game.

The NBA soon took notice, and the 76ers signed him up with a two-day ceremonial contract.

76ers head coach Brett Brown instantly warmed up to his newest player, and the team, which is in last place in its division, had a lot of learning to do.

“You’re going to teach our young guys how to hold your follow through, and how to shoot like you shoot,” Brown told Grow.

So far, Grow has practiced with the team and toured the facilities, and he’ll get to suit up for the pre-game warmup in Tuesday’s game against the Cleveland Cavaliers. His high school teammates will also join him for a presentation during the game.

Check out photos from Kevin’s first day on the @Sixers! http://t.co/bjWBIakOk6 | pic.twitter.com/jfmyOTsUMY

It’ll be a few months until Grow graduates from high school, but he’s already made it.