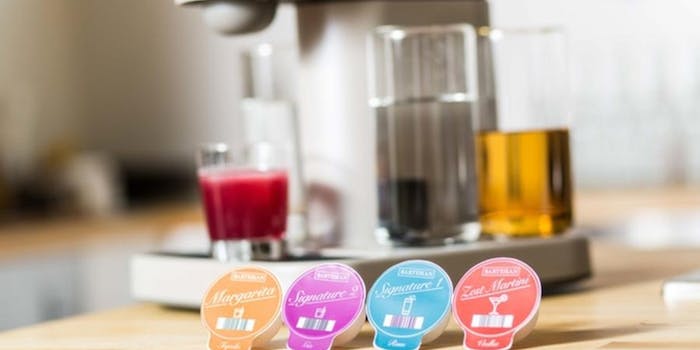 Have you seen those ads for the robot bartenders on Royal Caribbean and thought: “Man, if only my kitchen were big enough”? Worry not, thirsty technophile: A new Kickstarter campaign is trying to bring the power of the automatic cocktail to your countertop.

Bartesian is essentially a Keurig machine, but for booze. Just supply the liquor, put in your cocktail capsule, press a button and voila, a Sex on The Beach. That’s your drink of choice, right?

Bartesian has raised about 15 percent of its goal ,with 29 days to go. The machine has four containers on the side for basic liquors (vodka, rum, gin and tequila—what, no whiskey?), and has capsules to make a couple of classic cocktails and some of their signatures. The mixes are apparently made from “fresh juice concentrates, non-alcoholic liqueurs, and bitters, all in liquid form,” and the capsules they come in are recyclable.

Bartesian also has a list of tentative drinks for the future, including White Russians, Tequila Sunrises and Long Island Iced Teas. Basically, everything you thought you were a total badass for ordering in a bar when you were 18.

Keurig owners have already been DIYing cocktails for a while now, and there’s no dearth of artisanal cocktail mixers to be found on the market. Bartesian just seems like the next logical step toward an inevitable automated future. Imagine: You press a button for coffee in the morning, and another for a cocktail at night, right before you Seamless your dinner and set the timer on your Roomba, until one day you wake up and your house is running everything for you, and all you can do is take another drink and realize the Simpsons did it first.

Or you can just ignore all that because there’s a freakin’ robot making cocktails in your kitchen! The future is amazing.