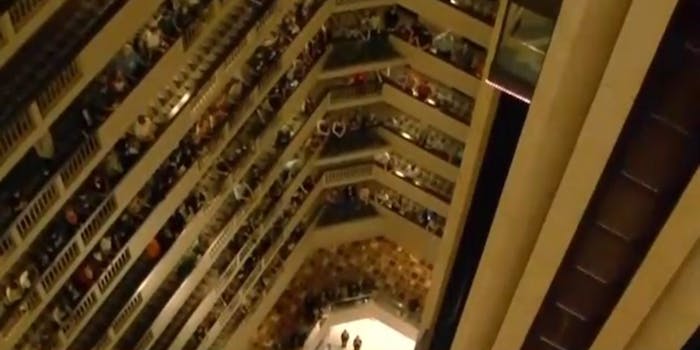 Here’s “The Star-Spangled Banner” like you’ve never heard it before. Uploaded to Facebook last night by Michelle Johnson, and later uploaded by another person to YouTube, most likely for patriotic reasons, the video featured this description:

“So, I’m in Kentucky for work and today when we got back, 1000 high school students had checked into our hotel. They had been making quite the ruckus tonight, but then did this to celebrate the start of the Olympics. Not the best video, (cause my fear kept me pretty far from the edge) but that’s 18 levels of them singing! Amazing!”

One YouTube commenter mentioned they do this every year as a tradition before competition, and indeed, the Kentucky State Choir Conference is happening in Louisville right now.

According to Louisville’s WDRB, it’s tradition that each night at 11pm, the choirs fill all 18 floors of the Hyatt Regency and perform the song. Here’s another angle: