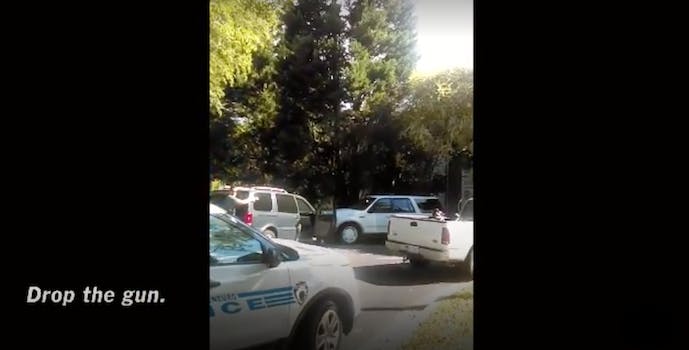 This article contains video that includes explicit images of a dead body.

The family of Keith Lamont Scott, who was killed this week by Charlotte, North Carolina, police, has release cellphone video of the shooting recorded by the man’s wife.

Rakeyia Scott, Keith Scott’s wife, released video to media outlets on Friday, offering the public the first view of the deadly incident after three nights of protest that have led to moments of violence and vandalism amid activists’ efforts to protest police treatment of African-Americans.

Officer Brentley Vinson shot Scott, 43, on Tuesday outside a Charlotte apartment complex. Police say Scott had a gun. His family maintains he did not, and that he was instead reading a book in the car when police arrived at the Village at College Downs apartments for another matter. Both Vinson and Scott are black.

Charlotte authorities have chosen not to release dashboard- and body-camera footage of the incident on the grounds that it would simply expose the “victim’s worst day” to the public and do little to add clarity to what led to the deadly shooting.

The video released by the Scott family does not show the shooting of Scott, although gunshots can be heard in the footage.

For those who do not wish to view the video, the New York Times has transcribed the scene:

Rakeyia Scott told MSNBC that she had gone back inside to get her phone charger when police arrived and found her husband sitting in the family vehicle. An attorney for the family said her saying “Don’t you do it” in the video was an attempt to keep Scott calm during the encounter.

While law enforcement has not publicly released its police-recorded videos of the shooting, the family has seen the footage and is asking for their release, reports NBC News.

“It was incredibly difficult for members of the Scott family to view these videos,” said Justin Bamberg, a Scott family attorney, “but as a matter of the greater good and transparency, the Scott family asks that the Charlotte-Mecklenburg Police Department publicly immediately release both of the videos they watched today.”