Kathy Sierra has toughed it out in the worlds of tech and gaming for over two decades. But she also paid the price.

Kathy Sierra is a prominent game programmer, developer, and tech writer. But her success has been marked along the way by death threats and constant harassment. Now, in a sobering blog post, she opened up at long last about the experience of being a woman in the industry who was unfortunate enough to become the subject of a troll campaign.

Sierra’s history of harassment included a canceled 2007 convention appearance after an anonymous blogger posted a picture of her head next to a noose. At the time of the incident, she wrote, “We’ve become so desensitized to vile comments on the net that many people can’t comprehend why I would feel threatened.” But in yesterday’s blog post, written on the 10th anniversary of her first online threat, she admitted that feeling threatened has become a way of life for her—and that Twitter, which she calls “a hate amplifier,” has made it all worse.

Until earlier this week, Sierra’s Twitter, @seriouspony, was a haven of rationality and an inspiring source feed for other women in tech. But now Sierra has deleted her Twitter and closed up shop. Her lengthy blog post, which she says she might delete, brilliantly explains and illustrates how toxic current online culture is for women, and how the trolls have evolved their methods of attack over the years to take advantage of tools like Twitter, developing what she calls the “gamification of trolling.”

According to Sierra, the only option for a troll target, once you’ve gotten their attention, is to leave the public arena. And that’s what Sierra is doing. 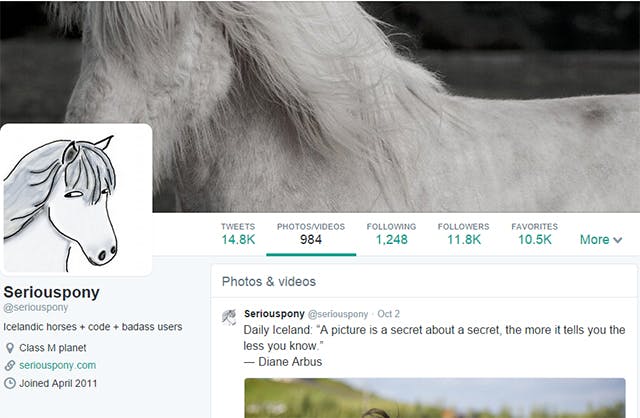 In 2005 she coined a phrase for brand trolling which she called “the Kool-Aid point.” In her estimation, “if you create passionate users then you have to have passionate detractors.” The Kool-Aid point, for her, was the point at which other people assume that fans of a product have drunk the proverbial Kool-Aid. What she didn’t realize then, Sierra reflects now, is that the Kool-Aid point also applies to other people—particularly to women who are perceived to be holding a microphone and getting attention:

I now believe the most dangerous time for a woman with online visibility is the point at which others are seen to be listening, “following”, “liking”, “favoriting”, retweeting. In other words, the point at which her readers have (in the troll’s mind) “drunk the Koolaid”. Apparently, that just can’t be allowed.

From the hater’s POV, you (the Koolaid server) do not “deserve” that attention. You are “stealing” an audience. From their angry, frustrated point of view, the idea that others listen to you is insanity. From their emotion-fueled view you don’t have readers you have cult followers. That just can’t be allowed.

You must be stopped. And if they cannot stop you, they can at least ruin your quality of life. A standard goal, in troll culture, I soon learned, is to cause “personal ruin”. They aren’t all trolls, though. Some of those who seek to stop and/or ruin you are misguided/misinformed but well-intended. They actually believe in a cause, and they believe you (or rather the Koolaid you’re serving) threatens that cause.

But the Koolaid-Point-driven attacks are usually started by  (speculating, educated guess here, not an actual psychologist, etc) sociopaths. They’re doing it out of pure malice, “for the lulz.” And those doing it for the lulz are masters at manipulating public perception. Master trolls can build an online army out of the well-intended, by appealing to The Cause (more on that later). The very best/worst trolls can even make the non-sociopaths believe “for the lulz” is itself a noble cause.

Sierra’s words are well-taken after a month of GamerGate and years of harassment and sexism designed to drive women out of gaming and tech communities. If there are ground soldiers in a troll war who are reasonable, then it’s logical that the “master trolls” can use their ideologies to manipulate them. Creating Twitter hashtag hoaxes has become a standard part of the modus operandi of /b/ and other 4chan troll communities.

To Sierra, the development of Twitter has amplified the ability of trolls to direct and harness more anger than ever towards the targets of their rage. “The time from troll-has-an-idea to troll-mobilizes-brutal-assault has shrunk from weeks to minutes,” she writes. “Twitter, for all its good, is a hate amplifier.”

Sierra brilliantly diagrams and explains the tactics used in every campaign designed to smear women who are the objects of these hate campaigns. The language, which she says is used again and again, is all too familiar to anyone who has been following the travails of Zoe Quinn or Anita Sarkeesian: First, the trolls label you a “whore”—either an “attention whore,” a literal “whore,” or if the trolls are lucky, both. Once they’ve put you in this position, their patterns are predictable, and the end result is always the same.

If you’ve already hit the Kool-Aid Piont, you usually have just three choices:

3. fight back (If you’ve already hit the Koolaid Point, see option #2. They Win).

Sierra makes the astute observation that at some point the attacks on a woman who’s hit the Kool-Aid point are no longer about you, the person. Instead they become about the “game” of trolling you: “The more dangerous social-Web-fueled gamification of trolling is the unofficial troll/hate leader-board. The attacks on you are often less about scoring points against you than that they’re trying to out-do one another.” Eventually, the trolls have, themselves, drunk the Kool-Aid—they’re more obsessed with you than the fans you originally had who pissed them off.

In Sierra’s case, the troll who masterminded attacks on her, including a fake doxing that he claimed drove her offline, was one of the most famous—the notorious hacker Andrew Auernheimer, better known to the world as weev. In 2008, weev claimed to be the author of a long and violent document written a year earlier which targeted Sierra and her family. Weeved doxed her personal history and info, including both accurate and inaccurate information. The document also included a false narrative of abuse involving Sierra’s young children and threatened to “punish” her. Not long after that document, weev became an Internet folk hero and Sierra had to live with his ascension to the top of the tech world. Even though weev is known to be a white supremacist, anti-Semitic, and sexist, his prosecution by the U.S. government, which many people including Sierra viewed as unfair, seemed to have erased his other failings in the eyes of the tech world.  “I believe this sent a terrible, devastating message about what was acceptable,” she wrote.

Twitter also made that phenomenon worse: now, not only did Sierra have to deal with weev’s general accepted hero status in her professional world—she had to see people she knew and respected retweeting him, despite his well-known doxing of her. Sierra came to view this as “prominent people in tech tacitly endors[ing] that threat against speaking out.”

Sierra originally attempted to return to Twitter in order to combat that mentality. But after weev inexplicably decided to start denying that he had been behind her original doxing, (a claim he first made to New York Times reporter Mattathias Schwartz), she found herself embroiled in years-old conversations with people eager to believe his new story.

So Sierra, earlier this month, reached the troll’s end goal: She decided to leave Twitter permanently and de-activate her participation. “I didn’t ‘rage quit,’ I just walked away,” she wrote. “I shut off a big cognitive resource leak.”

Sierra insists that “we,” meaning those of us on the receiving and observational end of these troll campaigns, need to act. There are no authority figures who can intervene against harassment in the current Internet climate, and the attempts of Twitter and Facebook to curb harassment have been notoriously ineffective. Sierra says we’re on our own, which is why we need to create our own safe spaces. She cites Reddit and GitHub as places where positive cultures have been maintained alongside male-dominated demographics—but those are only the beginning.

I do think we need more options for online spaces, and I hope one of those spaces allows the kind of public conversations and learning we had on Twitter but where women — or anyone — does not feel an undercurrent of fear watching her follower count increase.

Sierra’s blog post has galvanized Twitter, where it has been passed around and discussed intensely all morning.

Please share this, because it’s one of the most on-point articles about online harassment I’ve read https://t.co/lIaebSOAnr

Men: when every woman you know is tweeting this link and nodding along, you need to pay attention: https://t.co/VyXaJyQqh5

“don’t engage” throws targetted women to the wolves, and “troll” is a term meant to hide how they are creepy stalkers https://t.co/nBkIExbsMu

I listened to and believe Kathy Sierra. Listen & believe: https://t.co/ynEx7KI2S4

We can fix this if men like us speak up against abuse. Talk to the young men in your life. Champion and model respect and integrity. (2/2)

Sierra’s story is nothing new, but it seems to have opened plenty of eyes in tech culture about the lack of resources that currently exist to adequately combat trolls and harassment campaigns. If women are systemically marginalized from STEM graduate programs and careers in tech, then they can’t participate in the creation of technology that might help level the online playing field. Ultimately, the same technological tools that male-dominated tech culture prevents women from creating are the same tools men use to troll, harass, threaten, and dox women who dare to participate too freely in that culture. Online and off, the current culture creates a game women can’t win.

I’ve experienced about 1/1000th of what sesriouspony has, toward my kids & myself, & it’s real & traumatic. https://t.co/lqQxn0rI6f

I’ve been threatened w stabbing, shooting, rape, suffocation. Been told my kids deserve to be raped, that I deserve to die of my cancer.

Honesty time: I live in both anticipation and fear of reaching “the koolaid point” — I’m too easily Googled. https://t.co/FsTH4WZBze

Though there currently don’t appear to be many new alternatives on the horizon to Twitter as a safe space for women, the rise of organizations for women in tech like the Ada Initiative and the rise of female-driven spaces like Tumblr and other fandom communities are steadily creating change—or at the very least, environments where change can hopefully happen.

In Sierra’s case, however, these safe spaces have arrived too late. But it seems that ironically her departure from Twitter may do more good than her participation in Twitter ever did—it may be the tipping point that finally draws meaningful attention from tech culture to the abuse endured by all the women in their midst.