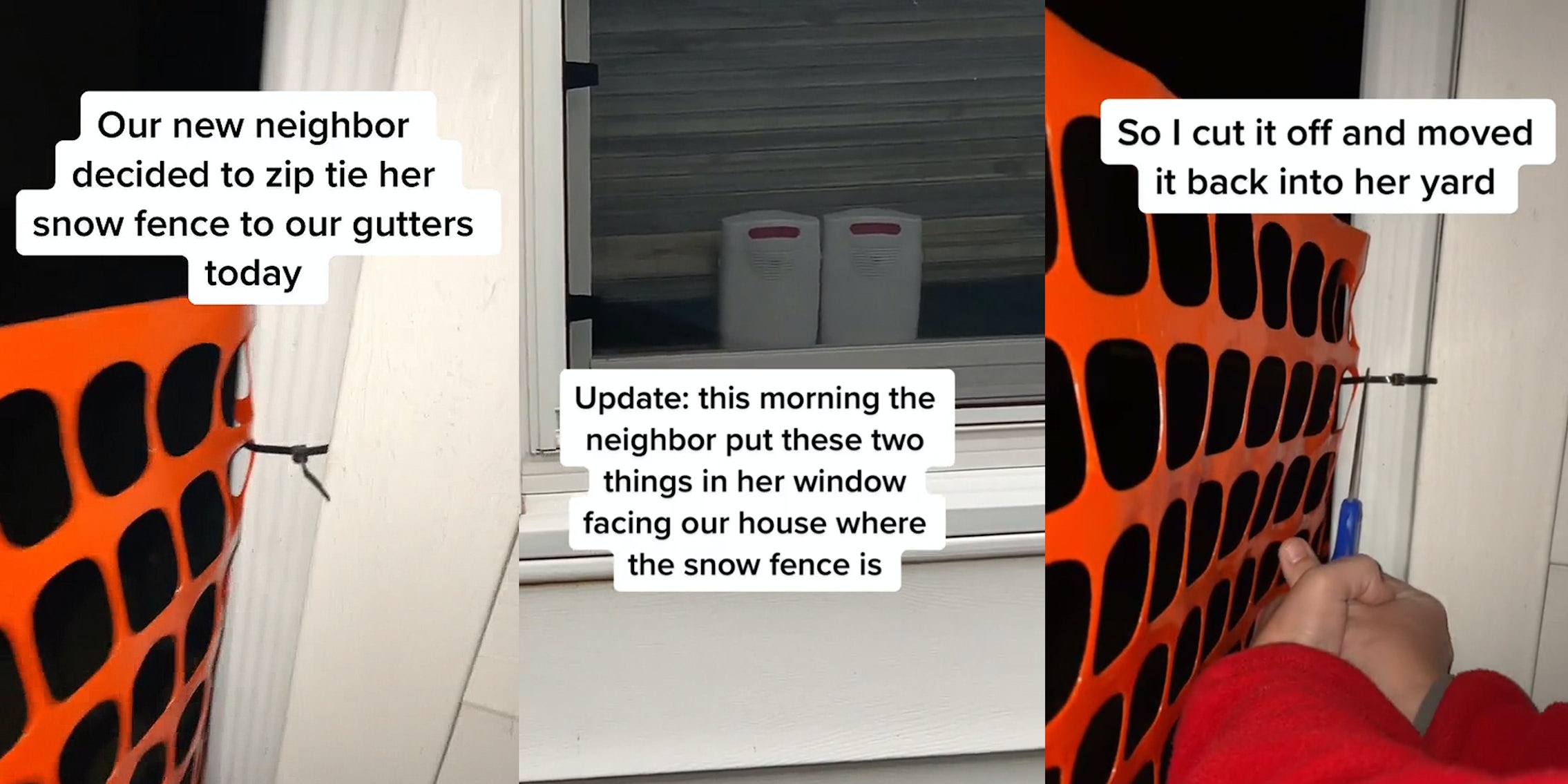 ‘Looks like we got Karen as a neighbor’: Man says neighbor zip-tied her snow fence to his gutters

'There is no reasoning with this woman.'

TikTokers Chris and Madison who post under the account @chrismadison15 posted a series of clips where they called out their neighbor who decided to use their house’s gutters to tie up their snow fence.

In the first seven-second clip uploaded by the family account, they show off the tie job with a text overlay that reads: “Our new neighbor decided to zip tie her snow fence to our gutters today.”

Looks like we got Karen as a neighbor now, this should be fun!

The video then transitions to Chris using a pair of scissors to cut the zip ties off of the gutter with a text overlay that reads: “So I cut it off and moved it back into her yard…tomorrow should be interesting.”

In the clip, the TikTok user then takes the newly severed plastic fence off of his property. This turned out to be just the beginning of the drama between the neighbors, which lasted for several TikToks. Chris said that he asked his neighbor to not tie their fence to their gutters and it appears that their solution to this issue was to simply pile up a bunch of items against their house, crossing into their property line.

@chrismadison15 Replying to @helianamariaa Yes that’s a garage can with a block of wood and a picnic table bench on top of it leaning against our house now. #greenscreen ♬ original sound – Wendy Williams Clips

He then decided to remove all of the items his neighbor stacked up against his home in order to keep the snow fence from falling down, which appears to have only further contributed to the drama. Chris said that he gave his neighbor two days to try and figure out a way to secure their snow fence that didn’t involve fastening it to his home, however, they failed to do that, so he had to take matters into his own hands yet again.

At this point I’m ready to just pull her snow fence out of the ground.

The neighbors’ dispute continued to escalate, involving motion detector alarms, moving of personal items back and forth, and even written signs warning the ‘Karen’ neighbor that Chris and his family were “watching” her.

But what are they? And yes all her junk is still piled up next to our house. We’ve got a plan though stay tuned

Eventually, after what seemed like several days and with the woman allegedly refusing to address the situation with Chris in person, he says she ended up calling the police on his family for moving her personal items off of their lawn and tossing them back onto her yard.

As of this publishing, that’s where the Snow Fence Saga ended between the two neighbors. In the comments section of the latest video, Chris stated that he’s planning on enlisting the help of an attorney with a cease-and-desist letter along with a privacy fence to separate him from his neighbor.

Users on the platform speculated whether the neighbor was allegedly causing drama so Chris would put up a fence without her having to foot the bill herself.

Chris said that the police simply told him to “try to get along with her.”

The Daily Dot has reached out to @chrisandmadison15 via email for further comment.