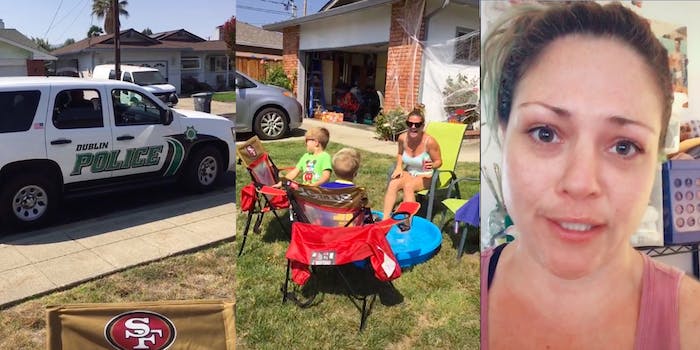 'We were expecting a bunch of teenagers with a real pool.'

A mom had the police called on her by her neighbor, who allegedly reported that she was throwing a “rowdy pool party.” The party consisted of two adults, two kids, and one kiddie pool.

The mom, TikTok user @Ladyraroo, posted a video on Monday explaining what went down.

The video, which currently has over 2 million views, begins with her recording the police vehicle outside of her home. Two children and a woman are sitting in lawn chairs, soaking their feet in a kiddie pool in the front lawn. “Our neighbor called the cops on us for a rowdy pool party, and I’m gonna show you what the rowdy pool party is,” she says.

Her roommate laughs and adds: “Can you believe it?”

“I can’t make this sh*t up. This b*tch is hateful as f*ck, dude,” she tells the camera. She goes on to say that the neighbor was driving by and “scowled” at the two women, who smiled back at her. She says the neighbor drove off but came back a couple of minutes later.

“The cops were laughing. They were like ‘We got a call about a rowdy pool party, and we were expecting a bunch of teenagers with a real pool,” she recalls how the police reacted when they arrived on the scene. “This was it—this was the rowdy pool party.”

She then pans the camera over to her friend and the two kids, all with their feet in the pool. A sign on her front lawn reads, “Hate has no home here.”

The video’s comments section is filled with replies about how petty the neighbor’s actions were.

“She should receive a citation for that,” one person wrote. “Wasting cops time. Wow.”

Others shared their “Karen” horror stories of times the cops were called on them for seemingly minuscule reasons. “I was reported in a home owners association meeting for driving down the block too often… I LEAVE my home too often for [people’s] comfort,” one replied.

“A couple weeks ago, my husband was making grilled chicken in the backyard, my neighbor called the fire [department] on us,” another commented. “Five pieces of chicken y’all.”

In a follow-up video, the woman explains that after the police left, she and her roommate were speaking loudly about the incident. “We yelled something like ‘we don’t do anything illegal, so quit calling the cops on us,’” she recalls. She says the neighbor’s daughter “happened to be walking by right at that moment, and she went in and told her mom that we accosted her or whatever.”

The neighbor then allegedly stormed out of her house, and when they asked her why she was angry, she sternly said, “I’m not angry.”

The woman recalls asking the neighbor, “What’s it like to have that much hate in your heart?” The neighbor allegedly angrily replied: “I don’t. I just don’t need a sign!”