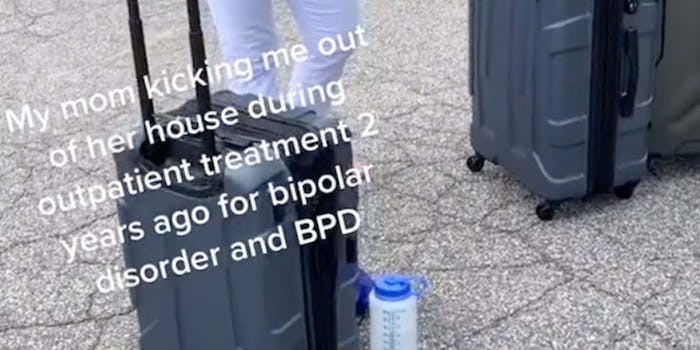 ‘Figure it out’: ‘Karen’ Mom allegedly kicks son out of her house because of his mental health in viral TikTok

The incident sparked debate in the comments.

In a TikTok posted on Sept. 29 by @borderlineimage, the TikToker says his mother kicked him out of her house two years ago while he was in outpatient treatment for both bipolar and borderline personality disorders.

“Which bag is my social and my passport in?” he asks her. She responds: “Figure it out.”

@borderlineimage then turns the camera on himself and says that if he can’t find the possessions he needs he will be calling the police. The video received 1.9 million views as of press time behind the caption: “Karen Mom kicks out mentally ill son going through outpatient treatment during a mental health crisis.”

@borderlineimage’s video sparked a discussion in the comments section about borderline personality disorder (BPD) and boundaries between family members among TikTok users who identified themselves as having BPD or being familiar with the disorder. According to the Mayo Clinic, symptoms of BPD include intense fear of abandonment.

“People really need to learn. BPD is one of the hardest mental illnesses to live with because doctors don’t even understand why we think the way we do,” commented @raechealdague.

“BPD is caused by severe emotional trauma and neglect,” wrote @spikyfruitprotein. “It’s clear to see who did this to this poor guy.”

“I have BPD too and chances are you’ve really hurt her,” commented @edenkresko. “She’s a human too.”

“Dealing with a family member with mental disorders is extremely draining,” wrote @mistyconol. “Sometimes we have to set boundaries for our own sanity.”

In a follow up video, @borderlineimage said that his mother’s actions in the video resulted in him being homeless.

“Just remember that you are worth it,” @borderlineimage says in the video. “No matter how low you are in life, you can always pick yourself back up.”

The TikToker also announced in the caption of his video that he is hoping to share mental health tips and resources on his TikTok account. In his bio, he identifies as having both BPD and schizoaffective disorder.

“I wanted to over the course of time periodically tell the story of how I got back on my feet,” @borderlineimage said in another follow-up video explaining his motivation for posting the interaction between him and his mother. “I posted it so that I could remember that I got myself out of it.”

He also said he doesn’t hate his mother, and that he hopes she gets help herself. That said, in the caption of his video, @borderlineimage says that he is “still angry,” but “trying to let go and be better.”