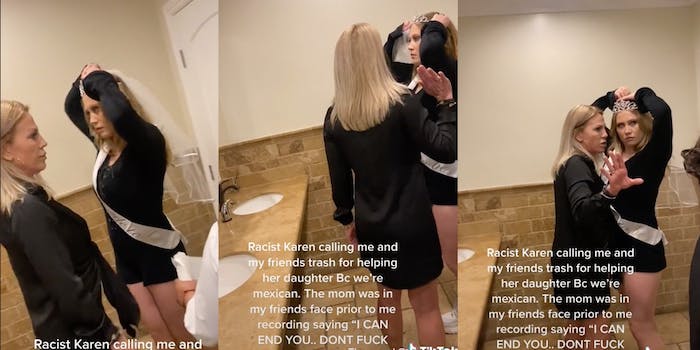 In a series of follow-up videos, the poster says her experience got worse.

A Sept. 19 video showing a woman calling another woman “trash” in a club bathroom has gained viral attention, with 1.8 million views on TikTok.

Posted by @lexacee333, the video shows a woman and her daughter adjusting a tiara and attached veil, with the mother telling her daughter, “She’s trash.”

“Racist Karen calling me and my friends trash for helping her daughter because we’re Mexican,” a text overlay on the video reads. “The mom was in my friends face prior to me recording saying, ‘I can end you. Don’t fuck with me.'”

In a series of follow-up videos, the poster says her experience with the woman just got progressively worse throughout the night, and that she didn’t record a second part showing this behavior because she had not even intended for the first video to go viral.

She said she and her friends had gone to the bathroom while at a club, and seen the bride-to-be struggling with her shirt. After asking if the woman needed help, @lexacee333 says she had said yes. While trying to help her adjust her shirt, the mother and another member of their party came into the bathroom, which is where the conflict got started.

“I thought, ‘Oh they probably think I’m like picking on her or something,'” she said. “So I told the mom, ‘I’m just trying to help her fix her dress,’ and the girl kept on in the green dress like, ‘You pushed my fucking hand.’ And the mom was like, OK, walk the fuck on.”

Throughout the evening, she and her friend cross paths with the mother in the video, having interactions that the poster says made others she spoke with come to the conclusion that the woman was racist.

Commenters found the whole thing ridiculous, but especially that the daughter didn’t say one word to her mother.

“It amazes me you were helping her daughter and the daughters old enough to be getting married but not old enough to step in and tell her mom she’s wrong,” one commenter wrote.

However, others pointed out that they heard “nothing about race” in the video, and @lexacee333 replied to one such comment that the situation felt discriminatory, even if it wasn’t overly so in the video.

The Daily Dot has reached out to @lexacee333 on TikTok in the comments of her video and via DM.