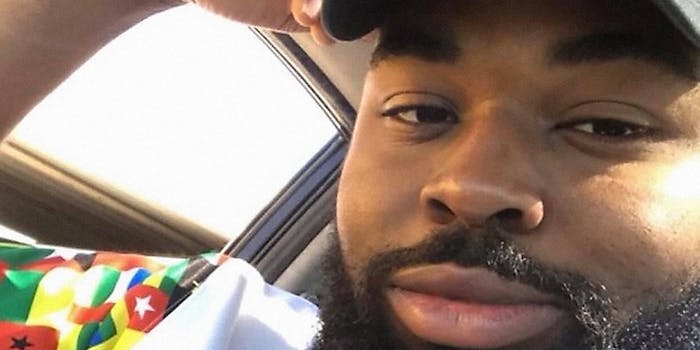 Marvin Scott III was reportedly undergoing a mental health crisis when Texas cops arrested him for less than two ounces of marijuana.

Social media users are using the #JusticeForMarvin hashtag to share the story of a 26-year-old Black man who reportedly died while in police custody, according to multiple news sources.

“His name was #MarvinScottIII,” civil rights attorney Lee Merritt wrote in a Facebook post last week, adding that the Texas man was jailed by Collin County officers after they caught him in a mental health distress situation.

“Not a mental health facility, just jail. In the jail he was sprayed with pepper spray, held down with a knee and ‘restrained to death,’” Merritt wrote.

“Crisis is not criminal,” he later added.

Scott was reportedly arrested for being in possession of less than two ounces of marijuana on March 14. When officers noticed Scott exhibiting “strange behavior,” they pepper-sprayed him and put a spit mask on his face, according to CBS.

Four hours after he was taken to jail, he “became non-responsive,” according to Sheriff Jim Skinner. He was taken to a hospital, where he was pronounced dead.

More details have begun to emerge regarding the circumstances surrounding Scott’s death. Dallas News reported that an officer kneeled on Scott’s arm to hold him down after he tried to escape once he was in jail.

According to Dallas News, a sheriff told Merritt that as Scott resisted, one officer “shoved his finger onto a pressure point beneath Scott’s jaw and pushed his head upward.”

Seven officers—a captain, a lieutenant, two sergeants, and three detention officers—were placed on administrative leave the next day, and the Texas Rangers opened an investigation into the matter, according to CBS DFW.

Rallies and marches were organized for Scott, with dozens at one demonstration demanding that the officers be arrested.

Many on social media are expressing their outrage over the lack of coverage Scott’s death has received. “Why is this going unnoticed?” one user questioned in a post that has been retweeted more than 27,000 times. “We stood for the major cases, it’s time to stand for you!”

In response to that viral tweet—that led to some believing the McKinney Police Department was the arresting agency in question—the MPD clarified that it had nothing to do with Scott’s death. “Our department was not the arresting agency nor did our officers have anything to do with the arrest or incident. We just want to make sure you have the correct facts. Please help stop the spread of misinformation. Thank you,” it tweeted.

“This has to stop. The system must change,” another user, under the #JusticeForMarvin hashtag, tweeted.

Others are expressing their frustration over why Scott was arrested.

“All over a partial joint of marijuana,” another user wrote.