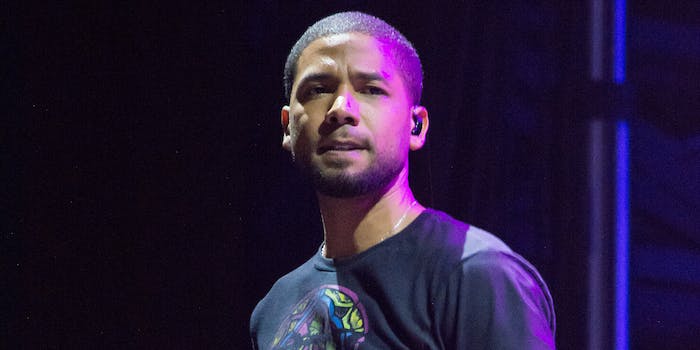 Hate crimes are still on the rise and often go unreported.

The Jussie Smollett case would have made a compelling storyline on the actor’s hip-hop soap opera, but unfortunately, it’s all too real.

Police are investigating the 36-year-old star of Fox’s Empire following allegations he helped stage a Jan. 29 attack in the Streeterville area of Chicago. Smollett, who is Black and gay, telephoned police after he allegedly claimed two Trump supporters jumped him at 2am while he was walking to his apartment. Initial reports of the incident claimed the assailants tied a noose around his neck and doused him in bleach while shouting racist and homophobic slurs. “This is MAGA country!” they allegedly yelled.

Just over three weeks later, Chicago police now believe that he orchestrated the attack. The two suspects brought in for questioning by authorities, Olabinjo Osundairo and Abimbola Osundair, are Nigerian brothers who claim they were paid $3,500 for pretending to target him for being “that Empire f****t.”

Smollett denies the allegations. Fox has rejected claims the assault was staged because he was being written off Empire, calling the actor a “consummate professional.” Meanwhile, the case could be headed to a grand jury in the coming weeks.

What’s troubling about the Smollett incident isn’t merely that a well-known celebrity may have faked a hate crime (for reasons that remain unclear) but that this attack will be used to discredit and diminish anti-LGBTQ hate crimes in the future. The LGBTQ magazine the Advocate reported that Donald Trump Jr. had tweeted about the allegations against Smollett 35 times by 1pm on Tuesday. He has posted 27 more tweets about the potentially faked assault in just two days.

Some of these tweets illustrate how the incident is being used to paint the LGBTQ community as unreliable narrators of our own lives. One is an article from the Federalist, a conservative website, listing alleged hate crime hoaxes. Linking to another thread on allegations of faked hate crimes, Trump Jr. dismisses claims the Smollett attack represents “one case and it rarely happens that way.”

It’s pretty rich to be lectured about hate crime reporting from the son of a president who imparts racist rhetoric and was accused of sexually assaulting more than 20 women before getting elected—and admitted to doing so on tape—but welcome to 2019.

Of course, Trump Jr. has a rooting interest in using the Smollett case as a cudgel against LGBTQ hate crime victims. His father’s presidency has led to extreme increases in violence against minority communities. Last year, the Federal Bureau of Investigations reported hate crimes had increased for the third consecutive year. An estimated 17.3 percent of those incidents were motivated by the victim’s sexual orientation or gender identity.

According to the National Coalition of Anti-Violence Programs (NCAVP), anti-LGBTQ homicides increased by 86 percent between 2016 and 2017.

LGBTQ people are more likely to be targeted for a bias attack than any other segment of the population. These incidents are common enough that two other anti-LGBTQ hate crimes made news this week: Four men were charged with beating a gay couple outside an Austin, Texas, gay bar in January, while a gay man in Salt Lake City recorded his own assault on his smartphone.

These numbers don’t even include the more than a dozen LGBTQ centers that have been vandalized, threatened, or had their windows shot out since Trump announced his campaign for the presidency in 2015. These incidents include an attack on a trans employee of a Washington, D.C., community center who was hospitalized after an intruder broke in through the front door and pepper-sprayed her in 2017. Local resident Andrew Cook was later prosecuted for assault and destruction of property, the latter a felony charge.

LGBTQ people do sometimes lie about being targeted for violence. However, cases like Calum McSwiggan—a gay YouTuber who was accused by West Hollywood police of faking his June 2016 assault—are relatively rare. The FBI estimates that between two and eight percent of hate crimes are found to be hoaxes.

The sad reality is we don’t need people like Trump Jr. to dismiss the abuse far too many LGBTQ people face every day. Law enforcement agencies already do that. A July 2018 investigation conducted by Washington, D.C.’s local Fox affiliate surveyed anti-LGBTQ hate crimes in the Beltway and found that prosecutors declined to press charges in 49 percent of cases. Of the 43 incidents, not a single assailant faced jail time as a result.

These issues are compounded by the fact that 87 percent of law enforcement agencies failed to report a single bias incident to the FBI in 2017. That means dozens more cases like the D.C. community center are going unreported.

Fifteen states still don’t have LGBTQ-inclusive hate crimes protections on the books at all. A proposal to add sexual orientation and gender identity to Indiana’s existing hate crime laws was recently dropped, and Senate Republicans in Utah are blocking LGBTQ inclusions in their state’s law over concerns they would usurp religious freedom.

This is why so many LGBTQ hate crime victims don’t come forward. The laws that do exist were not created to ensure a path to justice, and conservative lawmakers continue to oppose expanding legislation to fix those holes. Meanwhile, one of the most influential Republicans in the country is exploiting an extreme outlier to make it even more difficult for the United States to ever repair this broken system.

Jussie Smollett might have lied; no one really knows until a jury has had time to deliberate his case. However, countless LGBTQ victims of physical assault are telling the truth and aren’t being heard. Treating Smollett’s case as anything but an exception to a dangerous and deadly rule will ensure they continue to be silenced.