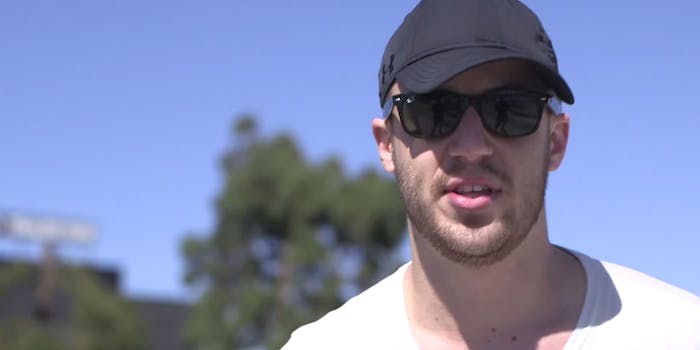 Petitions in the U.K., Brazil, and Germany all seek to keep Blanc out.

Pickup artist Julien Blanc has already been forced to leave Australia, and now people are campaigning for him to be blocked from entering the U.K. and elsewhere around the world.

Blanc describes himself as a dating coach, but his seminars and YouTube videos are often accused of promoting misogyny and sexual assault. In one viral video where he advises white men on how to pick up girls in Japan, he grabs a woman’s face and shoves it toward his crotch. His website, Pimp My Game, is equally explicit, with a front page that reads, “Make Girls BEG To Sleep With You After SHORT-CIRCUITING Their Emotional And Logical Mind.”

The Australian leg of Blanc’s lecture tour was cancelled after a massive public outcry against his pickup techniques. His Australian work visa was revoked, with immigration minister Scott Morrison explaining, “he was putting forward abuse that was derogatory to women and that’s just something, those are values abhorred in this country.”

Julien Blanc; a pathological narcissist who advocates & incites abuse towards women. I don’t want him on this planet. #takedownjulienblanc

He advocates ‘pick up’ tactics that are illegal in this & many other countries https://t.co/NryKR81N30 He must be stopped, as simple as.

Julien Blanc is so good at getting women’s attention, he got several thousand to vocally express not wanting to share a landmass with him

The #TakeDownJulienBlanc hashtag has spread from the U.S. to Australia to the U.K., resulting in more than 115,000 people signing a Change.org petition demanding that the Home Office denies Blanc entrance to the U.K.

“To allow this man into the U.K. legitimises sexual assault and predation, and sends a message that women are playthings or objects without agency,” writes the petition’s pseudonymous creator, Caroline Charles. On another site, 67,000 others have signed a separate petition with a similar goal.

At the same time, a much smaller petition is characterizing this demand as censorious, saying, “He is NOT sexist. He is NOT racist. He has. in fact, helped hundreds and thousands of men to find success in their dating lives.”

The campaign against Blanc is now a worldwide phenomenon. More than a thousand people have RSVP’d to a Berlin protest that describes him as a “rape coach,” while another petition with 280,000 signatures persuaded the Brazilian foreign ministry to bar Blanc from Brazil.

Blanc’s official job title is “executive coach” at the American dating advice company Real Social Dynamics, which is currently experiencing a scandal of its own. In a video that was removed from YouTube last week, RSD cofounder Owen Cook discussed what sounded like an incident of sexual assault. “She was taking a shower, and I didn’t think she wanted to have sex again,” said Cook, who often uses the PUA pseudonym Tyler Durden. “But I just threw her on the bed.”

PUA advice relies on reducing women to puzzles that can be unlocked by tricks and “expert” techniques, popularized by books like The Game by Neill Strauss. Companies like Real Social Dynamics wanted to bring more media attention to their cause, but along with increased media attention comes more public scrutiny. And as it turns out, men like Cook and Blanc are hardly the ideal poster boys for the PUA movement.