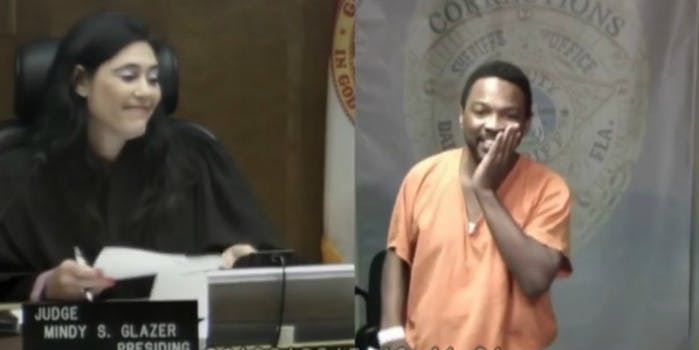 This will give you the feels.

When Mindy Glazer and Arthur Booth attended middle school together in south Florida, the two were good buddies. They played football with each other and, decades later, Glazer remembers Booth as “the nicest kid in middle school.”

In the years since they’d parted ways, Glazer always wondered what had happened to who she now terms as “the best kid” in the school.

This week, Glazer—a Miami-Dade County judge—got her answer after finding Booth in her court room for a bond hearing, accused of burglary and grand theft.

Watch how the emotional scene played out below.

Glazer says the worst part about it all is how old they’ve become (Booth is 49). But I imagine the worst part of it for Booth—whom police said broke into a home and stole a car and whose bond was set at $43,000—was having to hear Glazer, in her robes and all of her lawfulness say, “I’m sorry to see you here. I always wondered what happened to you, sir. … Look what has happened to you.”

This story isn’t simply about two friends being reunited in a court of law (though that’s certainly the strangest part of the tale). It’s also about wasted talent.

As Melissa Miller, Booth’s cousin, told Local 10, “It just brought back memories of how smart he was. He was a scholar, well-rounded athlete, bilingual. … It just broke my heart. We’re really trying to find help, because there’s obviously a need for help.”