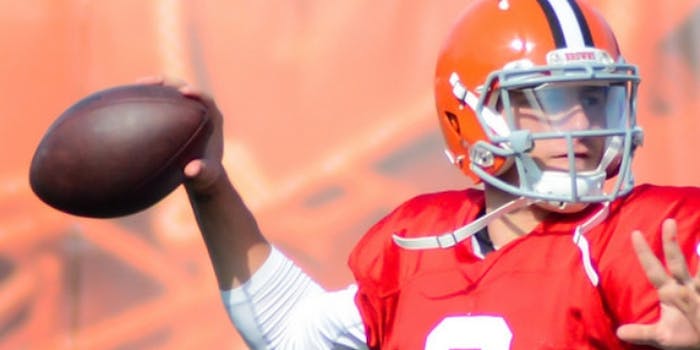 On Monday night, the Cleveland Browns lost to the Washington Redskins 24-23, but the preseason prime-time special was a showcase for Cleveland’s Johnny Manziel.

Johnny Football delivered the goods, at least in terms of creating sharable content. Trailing 14-3 in the third quarter, Manziel flipped his middle finger at the Washington sideline.

It was childishly flippant, but it did give sports something to talk about Tuesday morning, during a calendar lull that runs on hypothetical fumes about what might happen if specific knees stay healthy until December. Manziel’s steady hand offers you that network coverage and protection.

Ok. In the past week I have seen shots of a dead body on the news almost hourly. But we’re censoring Johnny Manziel’s middle finger?! GTFOH.

As Deadspin noted, the flip was immediately followed by Browns PR rep Rob McBurnett telling Manziel that America had just seen him and that Tuesday this topic would lead sports talk radio. Manziel is already my favorite player of all time, after Michael Irvin.