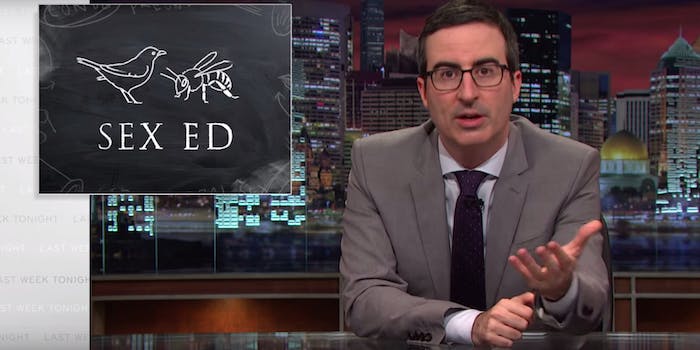 Some of these sex education videos have to be seen to be believed.

Sex education in the United States is a mess, and John Oliver is here to explain why.

Sex-ed curricula can vary wildly from state to state and even from school to school. With abstinence education still a popular choice across the country, many teens aren’t even getting decent sex education at all. They’re just being told to wait until marriage, often with help from gross and sexist metaphors like comparing women to chewing gum: If you’ve been “chewed” by more than one person, then no one will want you afterward.

The result is that many people reach adulthood without learning basic information about anatomy and consent. This puritanical system does nothing to combat teen pregnancy or the spread of STDs.

Last Week Tonight decided to tackle this problem by filming a star-studded PSA, with actors like Nick Offerman and Laverne Cox providing useful information about sex and sexuality.

That celebrity-filled sex ed video may not contain everything you need to know, but it certainly makes for some useful Cliff’s Notes. Maybe they should consider taking that show on the road.