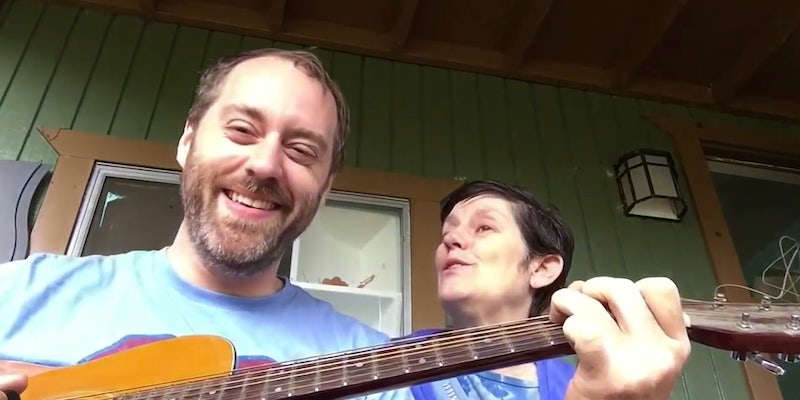 Once he started to play, something magical happened.

The overarching subplot of The Notebook, in which an older Noah tells his Alzheimer’s-stricken wife the story of how they met and fell in love everyday to cheer her up and let her remember him, may seem a bit heavy-handed and excessive to some who’ve never personally experienced the terrible disease. But for some, such as musician Joe Fraley, it was a something of a reality.

Until recently, Fraley used to bring his guitar over his parents’ house for his mom, who has the disease and no longer recognizes him. When he visited, he would play her a song to cheer her up. But now, a few months after posting one such session, he doesn’t bring his guitar over anymore. It makes him sad, and he regrets not playing as much when she was well.

“My mom is currently in a stage where she wanders endlessly looking for her home,” Fraley wrote on Reddit‘s r/videos. “It’s too hard for me to play songs to someone who I considered to be my biggest fan and have them leave the room during. At least at this moment. But once that stops I’ll mostly likely start bringing my guitar again and continue to sing to her.”

While she appears to be confused at first, Fraley’s mom’s expression instantly changes when he starts to play. In-between verses, pieces of their relationship shine through as she asks him questions, including how he knows where they are.