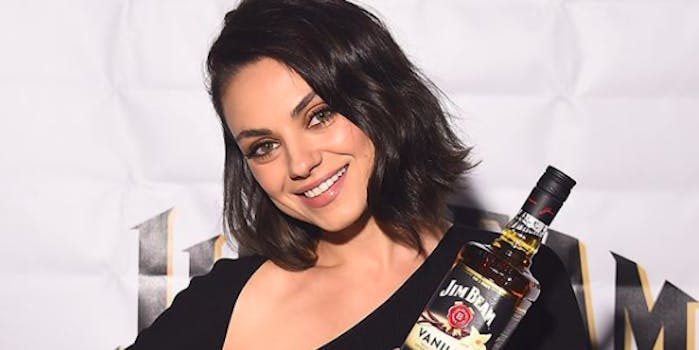 She's been trolling Mike Pence, and patrons are furious.

In a Conan interview last week, the actress said she’s been making monthly donations in Vice President Mike Pence’s name, who is a strong pro-life advocate and has been trying to defund Planned Parenthood for some time now.

When Conan O’Brien asked Kunis about a “Mike Pence prank,” Kunis said it was more of a silent protest rather than a prank.

“As a reminder that there are women out there in the world that may or may not agree with his platform, I put him on a list of reoccurring donations that are made in his name to Planned Parenthood,” Kunis said on the show.

She said every month Pence gets a letter sent to his office that says an anonymous donation has been made in his name.

The hashtags #BoycottJimBeam and #BoycottBeam have spread on Twitter. Users are calling for Kunis to be removed from the company and saying they will no longer drink Jim Beam bourbon or support the company.

#BoycottJimBeam I can't support a company whose spokeswoman cannot leave POLITICS out of selling Whiskey. I was just about ready to buy

no more @JimBeam in my house, my businesses, my vacation home, my four kid's homes or businesses, because of #MilaKunis. #BoycottJimBeam

Do not want to contribute to #MilaKunis income when she is sending it to PP for killing babies. Gross. #BoycottJimBeam

It appears as if Kunis was expecting this backlash. In the Conan interview, before sharing her secret donations, Kunis said, “This is when a lot of hate mail comes my way. I apologize if I’m offending anybody.”

Pence may have subtly responded to Kunis by quoting a tweet about making a pro-life donation in his name last week.

I'm honored. Thanks for all @SBAList does for life. I'm in. https://t.co/3wWGRHc7yU

Looks like Mike Pence has been getting a thank you card from Planned Parenthood every month, thanks to Mila Kunis! https://t.co/HCjkbiNhVs pic.twitter.com/GO7u7hocRZ

Kunis joined the Jim Beam family at the beginning of 2014 and has been the face of the liquor company since then, appearing in numerous ads and commercials showcasing the Kentucky-made liquor.

The Daily Dot reached out to Jim Beam and Beam Suntory for comment and will update this story if we hear back.