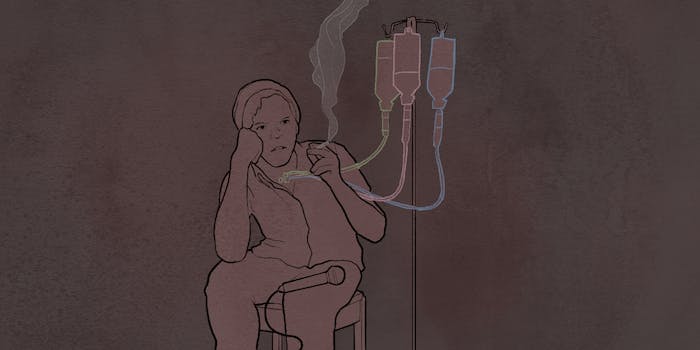 Talking chemo and comedy with the host of the podcast ‘Jesse vs. Cancer’

It's the humorous podcast you didn't know that you needed.

This summer, comedian Jesse Case was diagnosed with Stage IV colon cancer. Doctors have given Case a 50 percent chance of survival.

Considering his low odds of beating the cancer and the all-consuming pain he would soon undergo during treatment, his next big move might be hard to for some to understand: He started a podcast.

Jesse vs. Cancer is something unique in the big, wide world podcasts. Marc Maron may have interviewed President Obama, but for a real thrill, just listen to Case as he documents his cancer treatment in minute details. Did you know that chemo makes your toenails and fingernails fall out? And, during treatment, you have to go to the bathroom in a bag labeled “BIOHAZARD”? After just one episode (of 11 so far), I removed my headphones while laughing and crying at the same time.

In his podcast, Case, 29, shares the wisdom and unbelievable stories he has accrued throughout his life. There’s the Scottish manager of his first job who challenged employees to contests of physical strength. There’s the cop who pulled him over for loneliness. Not surprisingly, my favorite stories are the more scatological, of which there are a handful.

Case has already revealed he has a prerecorded “contingency” episode in case he loses the ability to continue. Listeners will know exactly what it means if and when the day arrives that this episode appears in the Podcasts app on their phones.

The Daily Dot spoke with Case from his home in Nashville:

I’m gonna start by saying I’m a little confused. You talk on your show about how technology is ripping us apart, but then without the medium of podcasting, you wouldn’t be able to get close to your fans in this way. So, really, what are you feelings about technology?

I mean, I understand the immediate hypocrisy there. But I think that it’s growing pains that we’re going through culturally. Obviously, I‘m super pro-tech. I try to use it as much as I can. It’s exposed me to some wonderful, wonderful things. I just think we’re learning how to navigate it. If you have Facebook or a Twitter feed, it’s just all your people. Ironically, something that’s supposed to connect the world is just isolating us.

Does the Internet make you feel isolated?

I just feel after staring at Twitter for a few hours, I get really lonely. I don’t know if that’s universal or maybe I’m just a psycho. … [O]ne thing I’ve learned through comedy is the more personal things feel, the more universal it is. I might say I’m the only person who feels this way, but then I say it out loud on stage and the entire audience knows what I’m talking about.

I’d like to ask you about the future. In one episode, you talk about knowing that in future there will be a cure to cancer and this feeling that you’ll never see it.

It’s strange being here right before a new technology. It’s not like it’s sad. Treatment of tumorous cancers is amazing: They take t-cells out of you and test it against other t-cells and all these clinical trials are being really successful. It’s pretty agreed internationally in the science community, they’re probably about 10 years out [from a cancer cure]. But I just think about all the people who died of polio before Jonas Salk, or the 1917 flu that just killed all of Pittsburgh.

But you wouldn’t say you feel sad about the future in general?

No, not really. You’re just kind of born when you’re born. I’ve always been afflicted with a weird fro situation. That’s worse than cancer, really, because that’s affected my whole life. Then the cancer happened and it was like, ‘Well, I’ve always had this weird fro, so what have I got to worry about?’

You feel like you were more prepared for cancer because of your hair?

Absolutely. (Laughs) I was actually pretty grateful for the ingredients I was given to prepare for this. It’s like an M. Night Shyamalan movie when I realized, ‘Oh, that’s why I spent 10 years staring into the abyss.’

The weird thing is how universal this is, and that’s really uplifting to me. We’re all connected, and I don’t mean that in the way like the artwork on a Tool album, not like some hippie bullshit. Seriously, now I feel less alone than I’ve ever felt, I’m less angry than I’ve ever been, I’m more forgiving, and more understanding of different points of view and different religions. We all have to do this together, so who cares.

It’s weird, if I live through this, this will be the best thing that’s ever happened to me. That’s really strange to me. Aside from having the cancer part, everything has been really great.

The Jesse vs. Cancer podcast is available on jessevscancer.com. Also on that site, you can contact Jesse and make a donation to the Vanderbilt-Ingram Cancer Center.