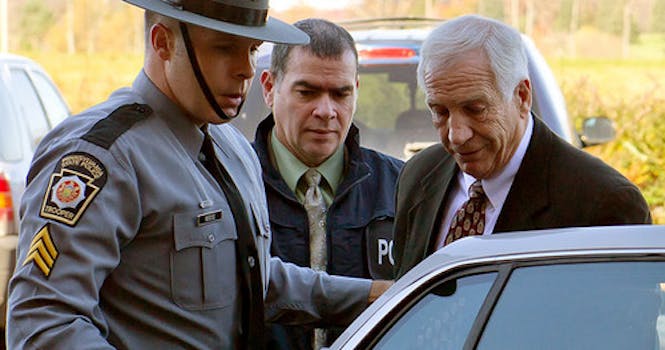 The controversy surrounding disgraced football coach Jerry Sandusky has spilled over onto Facebook, bringing the estranged wife of the defense attorney into the fold.

The estranged wife of the lawyer representing former Penn State Assistant Football Coach Jerry Sandusky has attracted an unexpected spotlight, due to a post on Facebook.

Mary Amendola used the social network to voice her disapproval over comments the father of her children made during a nationally televised interview with Bob Costas Monday night.

“OMG did Joe just say that he would allow my kids to be alone with Jerry Sandusky?” Mary Amendola posted on Facebook after her husband, Joe Amendola, told Costas he would leave his kids alone with Sandusky, who is awaiting trial on 40 counts of sexually abusing young boys.

The post, which was widely reported on sports talk radio and sports blogs this morning, is no longer available. In attempt to distance herself from her husband’s client, Mary Amendola first changed her Facebook username to Mary Christmas before setting her profile settings to private.

The Amendolas have become something of a sideshow in the case. Joe Amendola married and got Mary pregnant in 1996, when he was 49 and she was 17. The couple have two children together and are now separated.

Joe Amendola’s comments came during an interview Costas scored with his client. Speaking by telephone, Sandusky insisted he was innocent but admitted he had “horsed around” with young boys and had showered with at least one.

More than a few people posted head-scratching comments about the unorthodox decision by a criminal defendant and his lawyer to talk prior to trial.

“Sandusky’s decision to talk, and admit to showering and horseplay, is ‘legally insane’,” Marci Hamilton tweeted.

Since Sandusky’s Nov. 5 arrest, at least 10 more alleged victims have come forward making accusations against the former coach, who abruptly retired in 1999, after the first rumors of his abuse arose.