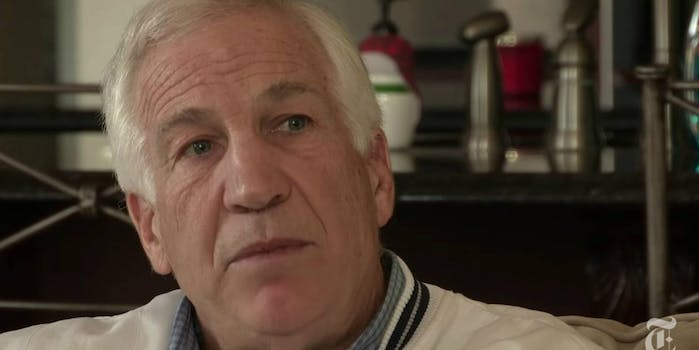 The son of Jerry Sandusky has been arrested and charged with sexually assaulting a child, a Pennsylvania State Police spokesman confirmed to the Daily Dot’s Dell Cameron.

Jeffrey Sandusky—adopted by the former Penn State football coach who was found guilty of 45 counts of child sexual abuse in 2012 and is serving 30-60 years in prison—was arraigned on the charges Monday in Bellefonte, Pennsylvania. His bail was set at $200,000.

According to WTAJ, police began an investigation into Jeffrey Sandusky in November after the daughter of a woman Sandusky was dating showed her father explicit text messages from Sandusky. Some of the text messages allegedly showed Sandusky asking for naked photographs.

A second child allegedly has been abused since 2013. The TV station reported that Sandusky has lived with the mother for the past five years. He has been banned from having contact with minors.

Daily Dot messages to the officer investigating the case were not immediately returned.