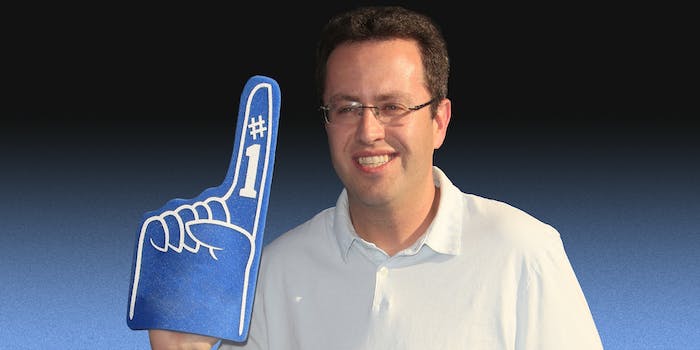 Jared Fogle is suing the parents of one of his victims

More than a year after pleading guilty to possessing child pornography and traveling to have sex with minors, Jared Fogle is back in court. But this time he is suing the parents of one of his victims.

Earlier this year, the parents filed a lawsuit against the former Subway spokesman alleging that their daughter became suicidal after realizing she had been unknowingly filmed by Fogle and his business associate Russell Taylor at Taylor’s house.

But Fogle is filing a counter-suit. Documents obtained by the Daily Mail reveal that Fogle is accusing his victim’s parents of causing her spiral of drinking, drugs, self-harm, and suicidal ideation.

The documents, which refer to the parents as B.T. and J.T., argue that “B.T. and J.T. maintained a hateful and abusive relationship toward each other, which included, but was not limited to, engaging in frequent fighting and arguing between themselves; abusing alcohol and getting drunk; and engaging in frequent fighting, physical abuse, and arguing with Jane Doe, which caused Jane Doe to suffer from emotional distress, anxiety, and major depression before she learned of any allegations [about Fogle and Taylor].”

The move is not winning Fogle any fans.

I'm not coming back to Twitter until Jared Fogle and Joe Paterno are no longer trending.

Fogle rose to fame with his “Subway diet” that helped him lose more than 200 pounds. During the past decade, he earned millions shilling sandwiches. He was fired last year, in advance of his guilty plea. He is currently serving a 15-year sentence at a federal prison in Colorado.