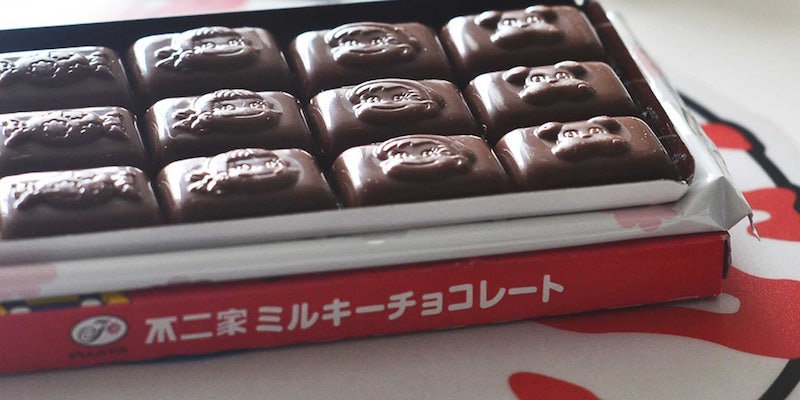 Rest assured, it's just the sugar that's bad for you.

In the hierarchy of journalistic clickbait, stories about those wacky Japanese and their bizarre customs rank fairly high, somewhere in between Girls think pieces and “15 Reasons Grumpy Cat is Sexist.” The latest entrant in the “oh, those crazy Japanese” canon? A story claiming that schoolgirls are putting menstrual blood in their crushes’ Valentine’s Day chocolates.

According to this stomach-turning report from Japan Crush (via Japanese Web publication Naver Matome, a curation site that sounds similar to Buzzfeed), lovelorn Japanese girls are putting their own hair, skin, and menstrual bloods in handmade Valentine’s Day chocolates (or honmei chocho, as it’s referred to in Japan), and then giving them to potential love interests.

To underscore the popularity of this “trend,” the original post links to a series of tweets discussing the practice, with Japanese women effusively trading recipe tips (translations via RocketNews 24 and Japan Crush):

“If it’s Valentine’s and I’m menstruating, I add my secret ingredient.”

“Please, God. Let me get my period when it’s time to make chocolate.”

“For those trying to mix in blood with their handmade Valentine’s chocolate, I have a suggestion: frozen raspberries. It kind of looks like caked blood and most importantly, the sweet and sour taste will fool them into thinking it’s blood.”

“It’s Valentine’s in just two weeks’ time. All you virgins who’ve never received chocolates probably don’t know about this, but in hand-made chocolates from girls, at the very least, there’ll be blood and spit, and hair that has been ground finely in a mixer. Since these are hand-made from the heart, please be sure to eat them alone in secret ♥︎”

Aside from the fact that this is obviously incredibly disgusting, there’s just one problem with this story: it’s probably not true. Or, at least, it’s probably not a “trend,” and it certainly doesn’t originate from Japan.

First things first: there’s a longstanding tradition of folk magic practitioners incorporating bodily fluid into their love spells, but not, as far as we know, in Japanese culture. According to this website, the usage of menstrual blood in particular stems from Sicilian folk magic and the African-American hoodoo tradition, which says that adding menstrual blood to a man’s coffee or tea will cause him to become infatuated with you. This superstition was even referenced on an episode of Real Housewives of New Jersey (so it’s probably true).

Some women believe if you eat their period blood, it’ll put a love spell on you. So they put it in spaghetti. NO Bueno!

There have been a number of instances of women doing this in the news, including this Indonesian maid who was arrested for spiking her employer’s coffee with menstrual blood.

Additionally, the trend seems remarkably similar to this story from two years ago, reposted and translated from the original Japanese on the Tumblr Melanic Fawn. Tagged #creepypasta, the story describes an obsessed female classmate giving a schoolmate menstrual blood-and-hair laced chocolates for Valentine’s Day.

So Japanese dudes, feel free to enjoy your chocolates this V-Day without hesitation: this is probably not a real thing. And journos, let’s move on to another “oh, those crazy Japanese” trope. How about those wacky virtual girlfriends, huh?