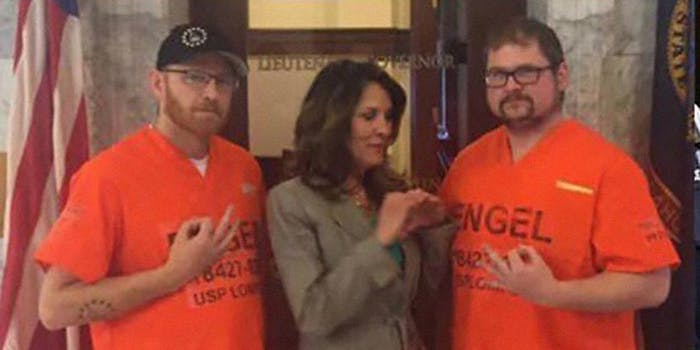 'Idaho must start pushing back against critical race theory in education.'

Right-wing Republican Lt. Gov. Janice McGeachin, previously accused of being a white supremacist over social media posts, announced on Thursday that she’s forming a new “task force” to review what she terms “indoctrination” of social justice within the education of Idaho’s young minds.

McGeachin claims she aims to protect Idaho from the “scourge of critical race theory, socialism, communism, and Marxism.”

“Idaho must start pushing back against critical race theory in education. I am assembling a task force to take on this challenge,” McGeachin said in a recent tweet.

“As I’ve been traveling around the state talking to people, people are asking me, they are really concerned about what is going on,” said McGeachin to Nate Shelman on station KBOI’s “Capitol Clarity” about social justice eduction. “They ask me what Idaho is doing, what are we doing in Idaho to prevent this from being taught in our schools, this dangerous ideology.”

The “dangerous ideology” speaks to critical race theories in academia that “combine progressive political struggles for racial justice with critiques of the conventional legal and scholarly norms which are themselves viewed as part of the illegitimate hierarchies that need to be changed. Scholars, most of whom are themselves persons of color, challenge the ways that race and racial power are constructed by law and culture,” according to the Berkman Klein Center.

McGeachin has been criticized for liking posts about white pride on Facebook and posing next to men making apparent white supremacy hand gestures. Per the Idaho State Journal: “Janice McGeachin’s post set off a firestorm, as she was seen in a photo posing with two members of an Idaho Three Percenters pro-gun rights group who were using a hand sign associated with the Three Percent movement but which is also associated with white supremacy.” She later said that she rejected “bigotry and discrimination in all of its forms.”

It appears that at least two other state representatives, Republicans Priscilla Giddings and Ron Nate, agree with McGeachin’s ideological premise.

“I appreciate the lieutenant governor taking the initiative to push back against the flawed concept that white people are inherently racist and that our young people should be made to feel guilty for actions they have never committed and biases they have never displayed,” said Giddings.

McGeachin’s task force formation arrives on the heels of an Idaho House vote after the vastly Republican chambers “shot down an effort to allocate $631.4 million to state colleges and universities,” according to the Idaho Statesman.

Per the Statesman report: “Senate Bill 1179 would have parceled out money from fees and tuition, and $315.2 million in general fund tax dollars. The bill would have cut $409,000 from Boise State University’s bottom line — shifting that funding to Lewis-Clark State College, amid Republican lawmakers’ concerns that Boise State is promoting ‘social justice ideology’ activities and curriculum.”